Until recently, my only experience at this restaurant was a couple of years ago when my girlfriend and I, after many (many!!) single malt scotches, strolled in to Akiko’s Restaurant to meet up with two other friends. I barely remember the meal, thanks to the scotch, except that it cost $250 per person. (Children: do as I say, not as I do.)

But many people I know love this place. I felt better about having shelled out such funds for a dinner I can barely recall, but I’m not really one to take someone else’s word for it when it comes to sushi. When it comes to nigiri — I am serious. If I ate one food for the remainder of my days, it would be outstanding nigiri. I would consider giving up red meat before I give up sushi.

You get the drift.

Fast forward a couple of years, and I finally decided to come see what the Akiko’s Restaurant hype was about. I have given San Francisco a legitimately good scour for amazing sushi, and I’m thrilled to have settled on my  top two favorites: Ino Sushi and Zushi Puzzle — the first being the most traditional and classic sushi outside of Tokyo, and the second having great fish and a great vibe with delicious nigiri, albeit not traditional. I have a couple of other favorites like Sushi Kei, though it doesn’t really compete with the first two. Then, I have a whole slew of restaurants, reviewed and unreviewed, of places serving “sushi” that I deplore.

Fast forward a couple of years from my first visit, I finally decided to come back.

Entering, it’s a modern space with dark hues but bright lighting and a very hip vibe. The place isn’t large, but with tables in the front adjacent to the sushi bar, and a row of tables squeezed in next to one another in the back room across from the sushi bar, it seats a decent amount of people for a sushi restaurant. There’s no signage in front; I don’t really get why, but I assure you it’s not because they can’t afford a sign. The ambiance sort of reminds me of BondSt Sushi in NYC; the only thing missing was the loud music.

The hostess checked us in and our table was ready when we arrived. The tables, as mentioned, are packed into the back room where servers need to pull out a table to let you into your seat, or my handbag and I would be bumping all kinds of crazy into the table and food of the two gentlemen seated next to me.

Those two were discussing San Francisco politics. The two to my left looked like they were on a first date, and she was either bored or very quiet, as he talked about everything under the sun through dinner. I know, because I could hear both tables and everything they said.

Which means they could hear me…

I didn’t opt for omakase at this restaurant because first, I wanted to see what one gets when you sit at a table. If I liked or loved it, I could always come back and throw away a mortgage payment on amazing sushi.

But I was becoming a little apprehensive looking around and noticing all of these tables were (1) occupied by non-Japanese folks, and (2) many tables were ordering “sushi rolls”.

The Food at Akiko’s Restaurant

How nice it would be to tell you what all of the things I ordered tasted like.

It was Monday night, start of the week. I was picking and choosing what to order to kick off this dinner.

“Do you have ankimo?”

No ikura, no shiro toro, and no ankimo.

So let’s review all of the other things I ordered. 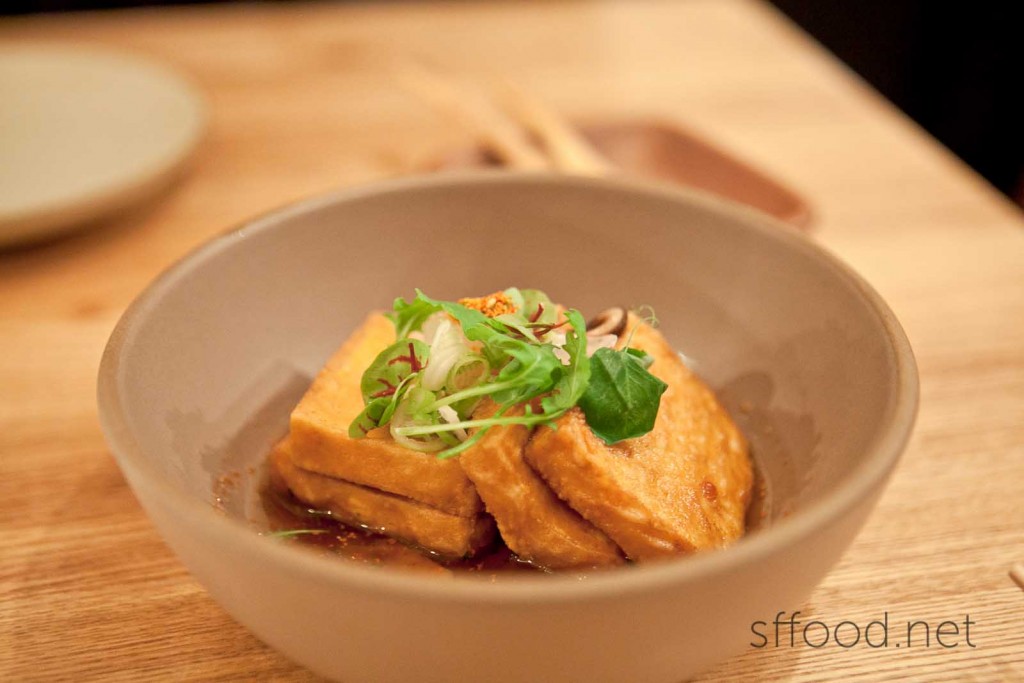 Perusing the menu, you had a list of specials listed on a printout, with the more typical Japanese cooking and sushi/sashimi items listed inside the book. There was nothing all that interesting in the main menu book that differentiated Akiko’s Restaurant from any other place, but it was important to try it, so we kicked off with some Agedashi Tofu. It was acceptable, but neither the starch on the tofu (level of crispiness) nor the dashi sauce was in any way impressive. Instead of a subtle dashi sauce, this one went head to head with the tofu….and won. Then again, I can barely eat tofu anymore since my experience at Raku Grill in Las Vegas with their in-house tofu that would blow your mind.

But putting aside the tofu itself, the agedashi tofu at Akiko’s Restaurant is pretty plain and homely.

Next up was the tako sunomono. These dishes, I just try when I enter a new Japanese restaurant just to see how they prepare it. Rarely will opt for these types of appetizers once I know the sushi is topnotch.

The slices of octopus were perfect. Each offered just the right amount of chewiness while holding in all of its flavor and not being rubbery at all. It was seasoned nicely. The cucumbers were nicely done, but erred a bit on the sweet side, detracting ever-so-slightly from the octopus’ flavors.

Now that these two appetizers are done, we waited about 20 minutes for the next dish to arrive, shown below.

Our first plate of nigiri at Akiko’s Restaurant is presented with saba, a must-try item for me as I can usually gauge how good or bad the sushi will be after tasting a cured mackerel at the restaurant, kanpachi and madai, the latter two from Japan.

The saba is over marinaded and “wet”. While saba is usually cured at Japanese restaurants, Akiko’s Restaurant either did it for too long or did it too recently that the vinegar was still actively and heavily on the fish. The taste of the mackerel was good, but the sushi rice was average, at best.

The Kanpachi, stated as being from the Kyushu prefecture, was average. Despite the marbling seen in the fish, it looked better than it tasted. I never say this, but it might have actually been better if it had been scorched prior to serving to wake up the oils. It was just so…average.

The Madai was very good.
This particular fish was imported from the Wakayama prefecture and presented really clean and simple flavors that worked nicely with the sushi rice at Akiko’s Restaurant. 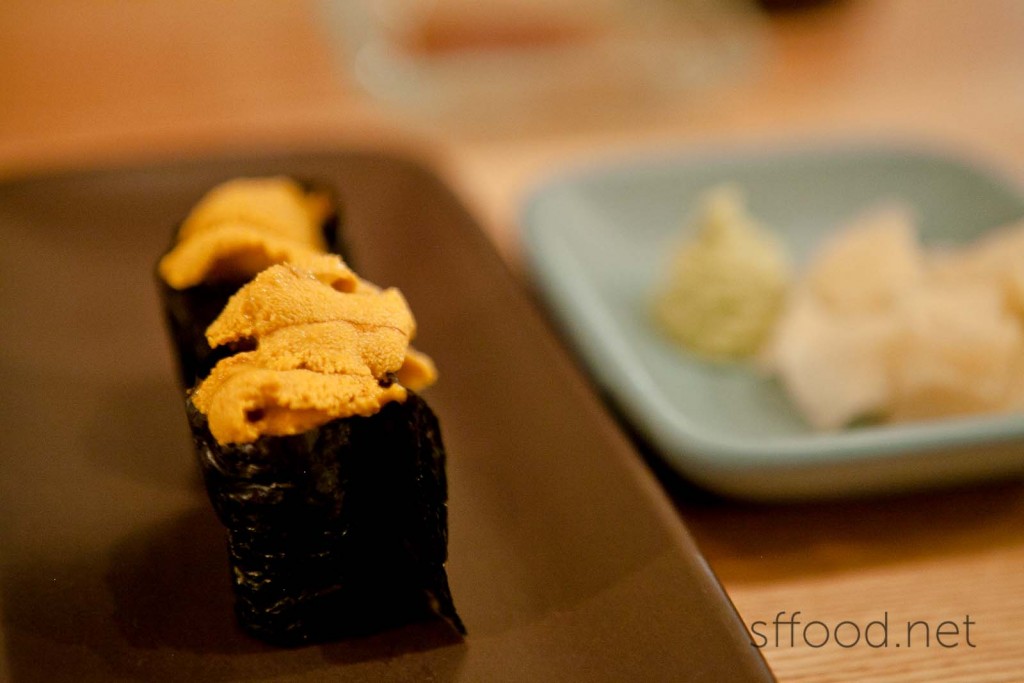 When I had ordered the uni at Akiko’s Restaurant, the server said there was an uni from Japan and one from Santa Barbara. The cost of the one from Japan would be near double, so I opted for the Santa Barbara. This was good, but again, there was nothing special. Keep in mind that what you see if $12 worth….which makes it about a 50-70% markup from Santa Barbara uni I can get at other restaurants. Without astoundingly good sushi rice, and the same uni, served in the same manner and nothing all that amazing about the nori — you begin to wonder why you’re paying so much more to eat at Akiko’s Restaurant.

As the final dish of nigiri was served, we were informed that they were out of yet another item that I had ordered. The Kinki, described as a thorny head fish from the Hokkaido prefecture, was also not available.

So let me restate: No ikura, no shiro toro, and no ankimo. and no kinki.

The salmon and the tuna shown in the photo left me underwhelmed. I don’t really have anything to say about them, good or bad…which might actually be worse than having something bad to say about it.

But the Akamutsu, or otherwise known as “red fish” or “deep sea grouper”, was flat out sensational. If you’ve ever seen me do a double take, this was it. The explosion of flavors of oils, butter, sour notes and even a mild sweetness — all in one bite. Explosion! It caught me off-guard because it was unexpected at Akiko’s Restaurant, after the foray of mediocrity that preceded this one amazing serving of nigiri. The twenty dollars spent on this one order was well worth it!

But it was also the only $20 that was worth spending here. Well, the Madai was actually very good, too.

Despite the numerous photos, let’s recap what was actually consumed:

There would have been four more pieces if they hadn’t been unavailable.

My plan was to order an initial sample of cooked items and nigiri to get a feel for the place, and if I was impressed, I’d move onto anything else the chef recommended, including the Miyazaki Wagyu with truffle nigiri — single piece — for $30 per piece.

But no matter which way I looked at it, I couldn’t justify sitting here any longer. Not only was it stuffy in the back room, course after course, I was exhausted from being disappointed and underwhelmed at Akiko’s Restaurant.

When the server approached to ask if we’d like anything else, I spoke up at the speed of lightning, “Nope, we’re good. We’ll take the check – thank you.”

I’m the first to state that omakase can yield a wonderfully and significantly better experience at any Japanese restaurant, but let’s also face it — not everyone can sit at a small sushi bar, and not everyone can leave it to the chef’s mercy and discretion when it comes to the budget. And frankly, if it’s good — sitting at the tables shouldn’t be this underwhelming. If I have to sit at the sushi bar and know the chef personally to get an amazing experience, then that would mean you, my readers, would not be able to get the same experience.

On this evening, I experienced exactly what the average person would experience at Akiko’s Restaurant. And ultimately, it was a large selection of fish imported from Japan that aren’t available on many other menus in the city (though for me, they weren’t available at Akiko’s either, apparently), with sushi rice that was just acceptable, and prices that were exorbitant, with many nigiri servings costing double that of the average price in San Francisco.

It’s a classic example of expensive not necessarily being better. 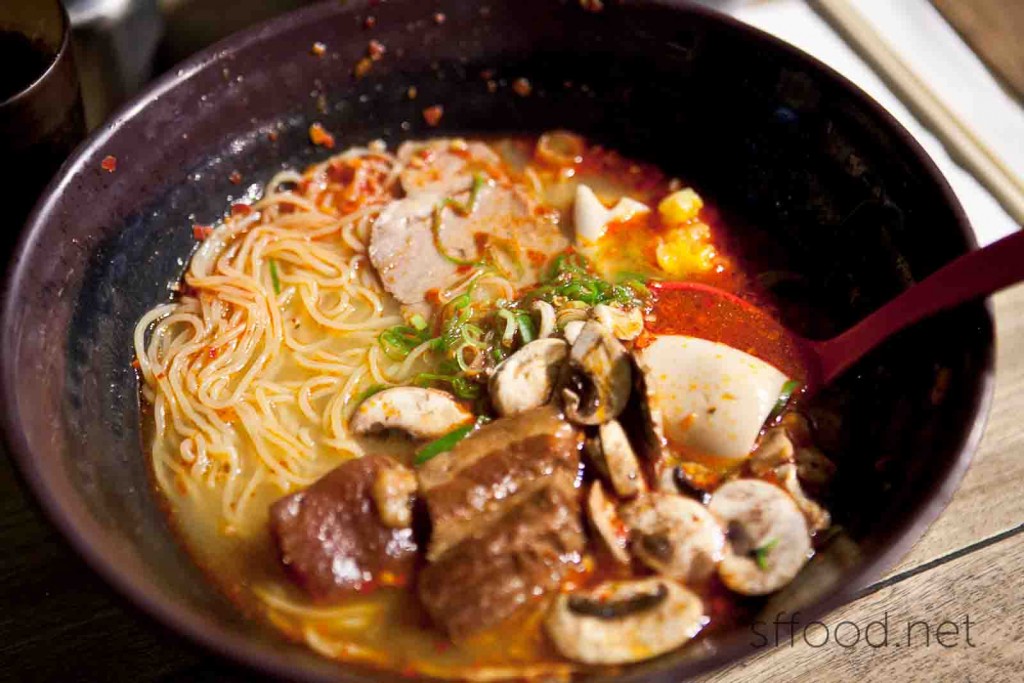 You know what this is? No, Akiko’s Restaurant doesn’t serve ramen.

After $150 (the bill was $125.61, and we paid $150 total), we were both still downright HUNGRY. I don’t mean “Oh, I could still eat,” or “I’m not that full”…. I mean we were famished like we’d barely eaten dinner. En route to the car, Mr. K points to a tiny little restaurant full of people with barely a seat available…

Yup. We ate ramen after this dinner. Enough said.

It’s a good thing we have a good sense of humor.

The French Laundry: Tasting the Best of Everything