Edited 2015: looking back, I have quite a few photos from various dinners at Albona and much to my utter dismay, none are really usable, like I’d be doing a favor to the restaurant by not using them.  For years now, I’d been intending to go back during summers to actually walk my dishes outside to take photos because I just can’t photograph anything in a dark, dim restaurant, but I just haven’t made it back. The restaurant is also small enough that setting up a tripod would be so obnoxious–and let’s face it, I just have an overall lack of skills in a darker restaurant. So these photos are embarrassing to me, but let me emphasize that each of these dishes, despite what my photos look like, were absolutely fantastic. I don’t make my “best restaurant!” claims lightly, and Albona is truly an amazing dining experience with warm, friendly service and great, great food.

Very few people enjoy food as much as I do. Some may eat more, some may even love it more, but I truly enjoy my food. Like Mr. K will often say to me, eating with me makes food fun–all because I do really enjoy delicious food. It makes me happy.

It’s not uncommon that there is a restaurant I haven’t tried; there are only so many days in a week or year.  It is uncommon, however, that I have not heard about a good restaurant, though.

Albona Ristorante Istriano is tucked away on a residential street in the North Beach area of San Francisco.

During its business hours, if you didn’t know about it, you would drive right by it without even noticing that it was opened for business.  In fact, you could walk right by it and still not know that behind these doors is what I now consider to be one of San Francisco’s best dining experiences.

For a few years, I’ve always considered Acquerello to be San Francisco’s best-kept secret – but it has now secured its place in the San Francisco dining scene.  My next mission is Albona. We are very lucky in San Francisco to have some amazing food available within city limits.  But a recent trend I have noticed in San Francisco is that many of these finer dining establishments offers amazing appetizers and “second” entrees, but the main dish is almost consistently sub-par and lackluster compared to the previous courses.

I will say off the bat that Albona hit a homerun for each course.  Istrian cuisine, as it turns out, is simply good food that carries a strong Italian history with a flair not commonly found in Italian food.

First, it’s a small restaurant that exudes “family-run operation”.  I imagine the uncle as the chef, the cousins working as servers, and the owner as the host.  While the one of the owners, Michael Bruno, is the host (and server, as needed), I know not if everyone else in the restaurant is actually family.  I do know that the masterful chef, Samuel Hernandez, is also part-owner.

What I also know is that they all, from each individual server to busser, worked together as a family should where each individual had a vested interest in extending the utmost in service.  Watching their interaction with each table like a hawk in preparation for this review – I confirmed once again what I always believed to be true:  when you own a restaurant, you owe it to your business to BE THERE.

In Albona’s case, the Bruno-Hernandez owners aren’t just there; they brand that restaurant, and ensure that every representative of this establishment is an extension of everything they believe and want to accomplish.  This extends all the way to the  food.

My first experience with the owner was on the phone.  I called en route to the restaurant to ask if we’d be seated immediately if we came in ten minutes.  He checked, said yes – and we arrived right on time to see a line of people waiting in the small front area.  Due to having after-dinner plans, I started getting worried that we’d have to wait, but alas, he came to the front, checked that I was the one who called, and seated us immediately.  Gotta love a man who is true to his word.

The menu at Albona reads beautifully with Italian names, and English descriptions.  We selected two appetizers and two entrees, and we chose Prosecco as our imbibe of choice for this evening.  We told our server that we’d be sharing and they went the extra mile to split it for us in the kitchen.  It’s these touches that catapult a good dining experience into an amazing one. 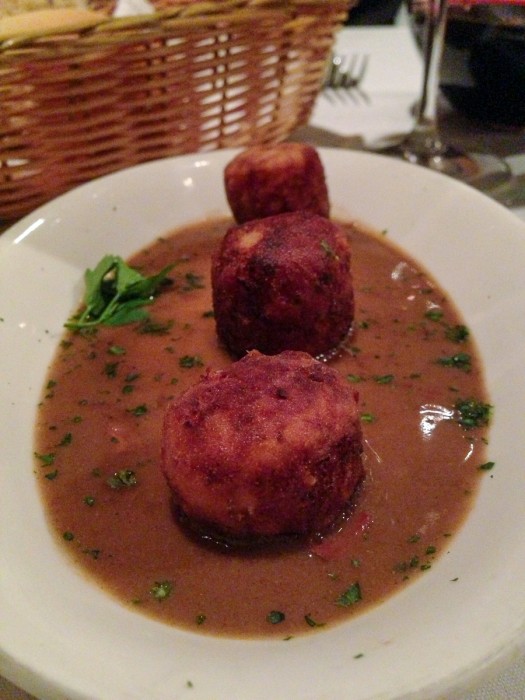 First up was the gnocchi, pan-fried in butter and served amidst the most tantalizingly good brown sauce that has ever graced this tongue of mine.  Not only was the gnocchi interesting and more similar to croquette type texture, the sauce was deep in flavor, but most noticeable was the delicate but ever so noticeable use of cumin in what could have been a basic Italian dish.  One bite and inevitably, our eyes rolled to the back of our heads and we savored each piece.  For something  close to $8, it was a large portion that was split onto two plates – and quite filling. 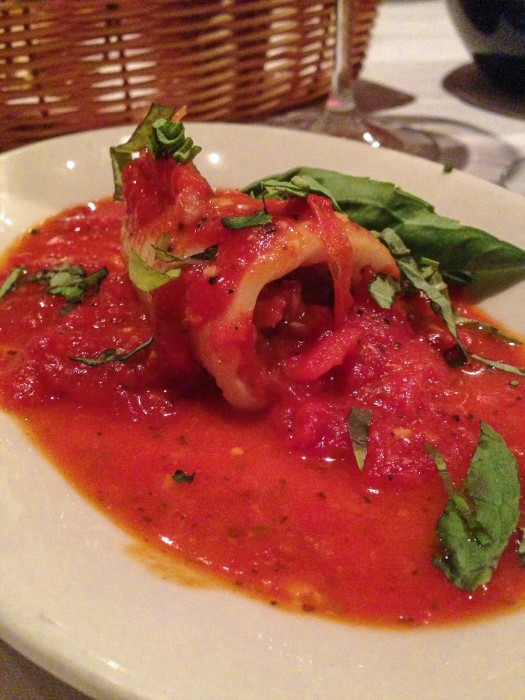 Next super-star delivered to our table was the stuffed calamari. One order consisted for four nicely sized squid, stuffed silly with an amazing fish concoction consisting of red snapper, salmon, and other goodies.  Every single element of  this dish stood out and was delightful to my tastebuds.  But most stellar was the ever-so-basic but amazingly delicious red sauce that accompanied the perfectly cooked squid.  Consisting of the right amount of acidity, sweetness, and depth, it took every ounce of my being not to slurp the remainder off the plate.  Unlike the deep and heavy flavors of the buttery gnocchi, this dish was light and playful, but every bit as memorable.

The entrees were superb. 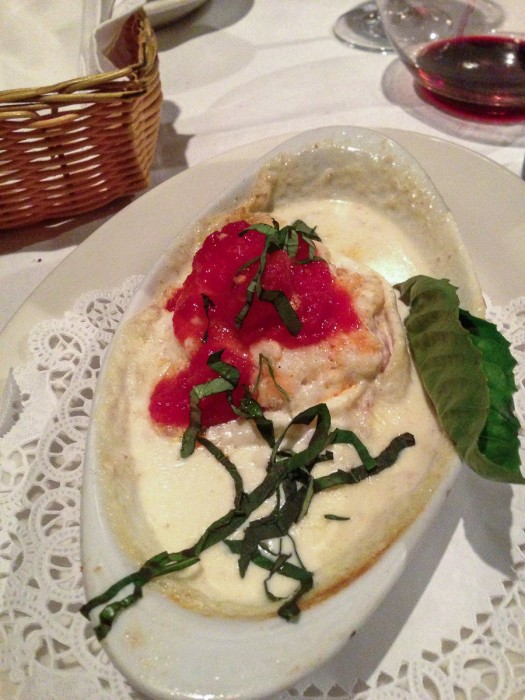 The “strudel” – which is their signature pasta dish and rightfully so – was nothing short of fascinatingly good.  The best way I can describe this is a smorgasbord of amazing cheeses and red sauce with well-cooked pasta that makes lasagna cower in shame.  It was also a heart attack waiting to happen, but anyone who knows me knows I put taste before health. 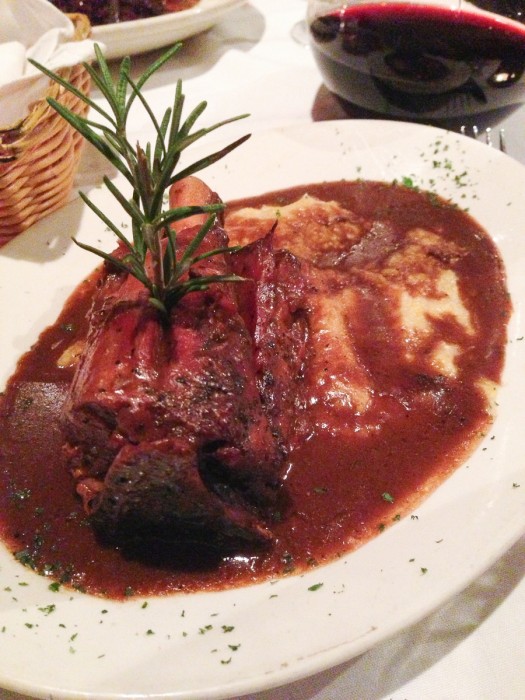 Our other entree was a braised veal w/ soft polenta.  I have a love for polenta – and after this mashed version, I’m an even greater fan.  Perfect texture to both the meat and polenta, with the veal just falling off the bone begging to be eaten.  Unfortunately, by this point, all we could muster up was a big bite of each and requested it be packed in a take-out box.

Being so incredibly full, we naturally passed on dessert – much to my dismay.  It was one of those times when you wish you could just whip out a second stomach from your purse to start the whole process over (patent still pending on this technology) but alas, there was no room left in the one stomach I have. (Edited to add 2012: This would be a grave mistake. The desserts at Albona are spectacular and not be missed, especially the chocolate flan. I believe in that thing so much, I even put the recipe in my book thanks to the chefs sharing it with me!)

The owner was gracious enough to send us a plate full of three gelatos, all housemade, regardless.  All three were so refreshing, but my favorite was the raspberry.  Delicious.

All in all, Albona impresses from start to finish. This place is ideal for dates, and with prior arrangement, can be made to be perfect for even business dinners.  The ambiance is soft and inviting, classy but unpretentious.  It offers all that fine dining has to offer, including the great level of service and outstanding food, but ultimately, it comes at a shockingly low price.

Dinner on this evening hovered right below $110 (prior to tip) for a bottle of fine Prosecco, two appetizers, and two entrees, with a dessert on the house.

It’s an unfair comparison, but I have to do it solely because the food is good enough to warrant a comparison. Albona beats out Fleur de Lys, and Michael Mina as far as taste goes. Albona ties with Gary Danko and Acquerello at a significantly lesser cost. Albona dims in comparison to French Laundry on all levels, but dinner at Albona also cost precisely 1/7 of what a dinner at French Laundry costs, and I don’t have to drive to Napa to eat at Albona, nor do I have to fight off people and animals for a reservation.

When you have a date that you want to impress, or you have to absolutely make sure the food is perfect on a certain evening out – Albona fits the bill.

Edited 2014: On several visits since this review, I’ve enjoyed many meals at Albona, always spectacular. There was even one day when Mr. K and I did a dinner around San Francisco at 6 different places, eating one “best _____” item at each restaurant and for desserts, we went to Albona because the chocolate bonet is out of this world. The chef was so nice about it, despite our having come to dinner for only one dessert to share–and he basically sent out everything! 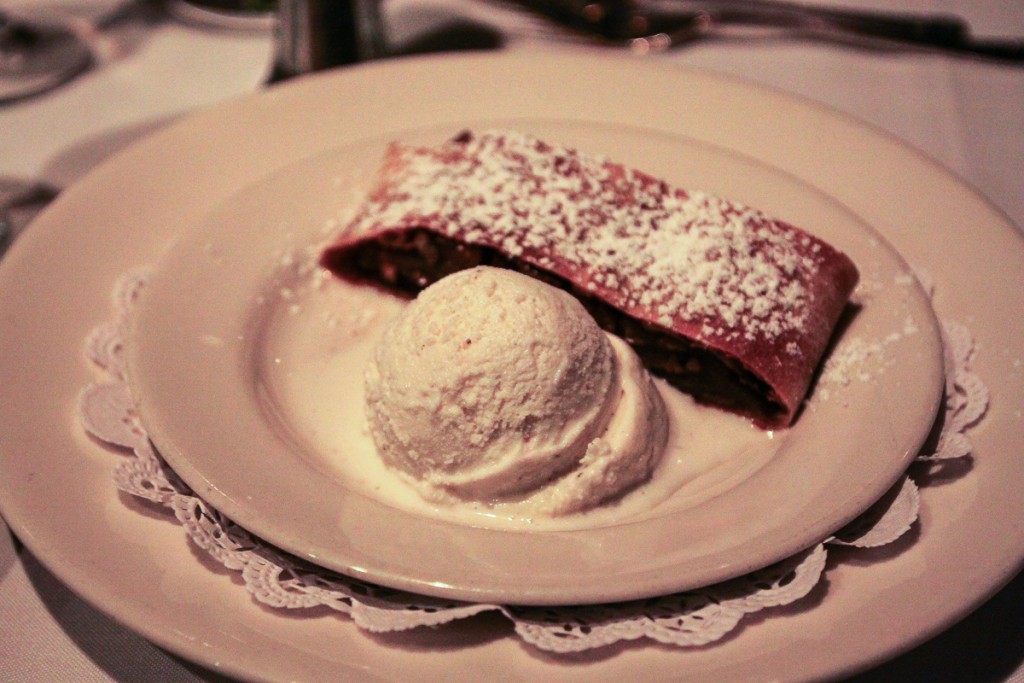 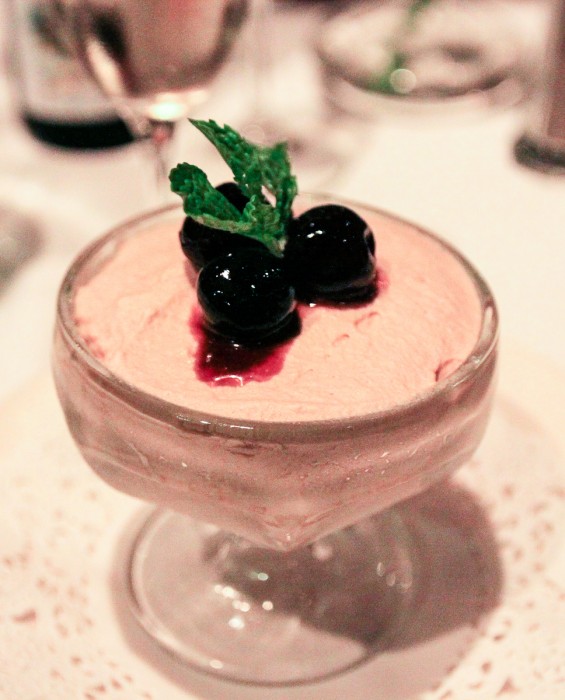 Call for a reservation, and I suspect their staff will go out of their way to ensure that your evening goes as planned without a hitch.

Albona is located at 545 Francisco Street (between Mason St & Taylor St) and can be reached at (415) 441-1040 or you can make a reservation via their website or on SeatMe.  They appear to be closed on Sunday and Mondays – and offer valet parking, which is a priceless commodity in the North Beach area.

One of SF's Best Italian Restaurants
Near Perfect
With good reason, Albona makes it as one of our favorite date night restaurants in the city.
Food9.7
Service10
Imbibe Choices10
Location9.2
Price9.5
9.7
Exquisite in Every Way