Although  I had heard of Alexander’s Steakhouse for years, I had never been to the location in Cupertino.  Living in San Francisco, I seem to rarely get down to the South Bay and if/when I do, I am not craving steak; I head to the South Bay for some good Asian cuisine. Originally, for this special occasion, Mr. K had planned an evening at the once fabulous Michael Mina.  Since they had just moved – I was excited to see and try the new location but rumors indicated it had gone completely downhill since moving, so I found myself horrified.  I have been to Michael Mina for dinner a few times and I feared (1) being disappointed and (2) hating the food so much that I’d have to rip it to shreds on this site.   I don’t know about you guys but it always feels so ungrateful when you have to speak badly of food that someone else put so much thought, time, and money into getting for you. When he mentioned Alexander’s Steakhouse as a replacement, I recalled that they had finally opened its SF location.  Finally, a chance to have the famous steak at Alexander’s Steakhouse without leaving San Francisco!  He was able to secure 9 PM reservations and we arrived on time, and were seated immediately.

Alexander’s Steakhouse is at the old Bacar Restaurant and Bar location.  Given how quickly this new steakhouse had opened in the old location, I guessed that there had been no construction done — and pulling up in front, this was confirmed.  Immediately, I noticed the host was extremely polite and very professional — just what I’d expect.  We were seated promptly on the top floor – and were given a table for four when it was only two of us.  Our server came over and introduced himself while Mr. K and I were examining the huge wine list and menu.  They also have a separate cocktail menu with really interesting drinks. On this evening, there were offering a truffle prix-fixe dinner – for a meager $395 per person. (!?!?) Now I love truffles as much as anyone, if not more – but dinner at French Laundry is $210 per person — and paying $395 for a truffle dinner at Alexander’s simply will not happen in my lifetime.

We were in the mood for oysters so opted for a half dozen Kumamoto oysters that were on the menu in lieu of the other appetizers served w/ lemons and an interesting sauce w/ Sriracha foam on top.  Our server “upgraded” our half dozen into one dozen oysters, much to our surprise.  These were really fresh oysters – and while small, they were meaty and delicious.  I could have downed three dozen of these by myself.

We also ordered a seared foie gras appetizer at Alexander’s Steakhouse that was small in size and enormous in flavor.  Presented beautifully, this dish was a keeper.  I found myself anticipating the steak more than ever by this point. Next up — the salads. This is where Alexander’s Steakhouse started to worry me a bit.  Mr. K’s iceberg wedge was good — but my Caesar salad was subpar…and I’m being nice.

The idea was phenomenal; a Caesar salad already mixed in with the anchovies and dressing with dried crouton-esque bread on top and a softly poached egg in the middle.  The idea of a poached egg on top was phenomenal, the dressing was good, and the dried bread on top was fantastic.  The entire salad in itself was a total disappointment, though.  The leaves were all soggy, and there was too much of the good dressing on it that it was entirely too salty.  In my opinion, a steakhouse really needs to have an exquisite salad option — and this particular salad simply disappointed.

But the meal wasn’t over.  Thankfully, they gave us a tiny scoop of sorbet as a palate cleanser, and the garlicky Caesar was out of my mouth and mind.

Then the steaks arrived with the sides.

First, let me go over the steaks.

My ribeye was perhaps one of the best ribeyes I’ve had to date.  Perhaps the steak knife was really sharp — but never have I had a piece of meat melt at the touch of the knife.  The marbling in this meat was just enough to give it a lot of flavor, but not so much that I was trimming away fat with every bite. Tender and cooked perfectly, the ribeye at Alexander’s Steakhouse was simply phenomenal.

That is — the steak was good AFTER I had scratched off all the blue cheese junk on top.  My fantastic piece of meat was offended by the blue cheese, really; no good piece of meat needs anything on it except salt, pepper, and perhaps a good dose of butter.  The ribeye was accompanied by a simple watercress salad.  Good on the salad — bad, bad on the blue cheese!

The other steak we ordered was a medium-rare Filet Mignon.  To me, the filet can easily be a flavorless meat compared to the ribeye, so I like ordering it just to see how they bring the tender but fat-less cut of meat to life. The 10 ounce cut was substantial, and the thick filet was cooked evenly throughout to a truly beautiful medium-rare.  It was seasoned properly and it was quite delicious.  It was not, however, the best Filet Mignon I had ever had. I am still a bit split on the sides at Alexander’s Steakhouse. 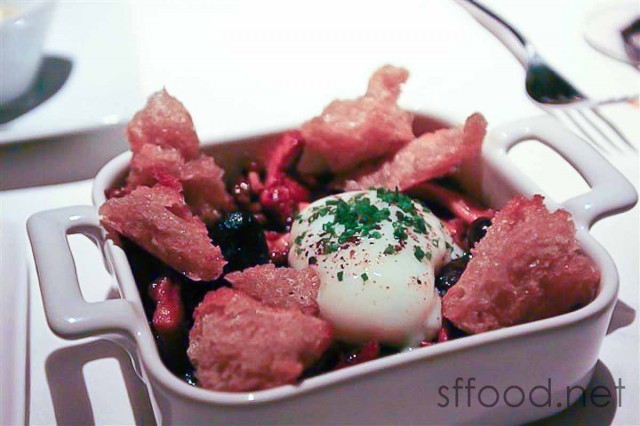 The mushroom side dish at Alexander’s Steakhouse was rich in flavor and cooked perfectly.  We had leftovers, and I will say that this dish retained its full flavor even the day after. This dish, like the Caesar salad, came with a softly poached egg on top — and I daresay I am not the only person out there who gets a bit happy at the sight of a poached egg.

What I admired but did not enjoy was the deep-fried toast that accompanied this dish.  Again, however, the idea was phenomenal but the actual combination failed to “wow” me.  More mushrooms w/ the poached egg, adding a bit of green onions and something to give the dish a fresh texture — and chucking the deep-fried bread would make for a much better mushroom side entree.

Let’s talk about the wine list for a moment. With other steakhouses, I found more choices in the moderately priced wines than I did at Alexander’s Steakhouse.

In general, I found a mark-up of about 20 percent compared to other restaurant’s.  At the original Alexander’s in Cupertino, this might pass because I’m sure the decor and ambiance of that steakhouse was customized to the concept of Alexander’s Steakhouse.  At the old location of Bacar, however — especially for those of us who had frequented Bacar — it seemed entirely overpriced.  The choices of wines that you had for under $100 a bottle were minimal. That said, we ordered a $78 bottle of 2005 Freeemark Abbey Cabernet Sauvignon, which I hadn’t tried before — and it opened up beautifully.  Our server had said it was good — and while it was truly fruit-forward, the wine was indeed big and bold, too.  I love that combination, and with the steaks, it held its own throughout the meal.

We skipped the dessert portion at Alexander’s Steakhouse.  While I did look at the menu, I was (1) full from the meal already, and (2) the coffee we ordered more than sufficed as a nice finish to a beautiful meal.  Alexander’s coffee is french-pressed and extremely fresh.  We opted for an Ethiopian blend, and while it was written up as a bold/strong bean, I would rate it more as a medium strength taste.  However, it was indeed as fresh as any coffee ever would be, and for $10, we got approximately 2.25 cups of excellent coffee. The meal began at 9 P.M. and unbeknownst to us, three hours had passed.  When we left the restaurant, it was a quarter past midnight.  Sharing a great meal with a person whose company you enjoy, without a doubt, makes time fly.  While Alexander’s Steakhouse failed to WOW me on every single level as one would hope from a 10/10 steakhouse should, it does have its high points. Extremely high points.

Our server brought out a huge green-apple cotton candy out at the end of the meal.  I don’t know about you but the sight of cotton candy makes me happy and reminiscent of my childhood days.  Of all the cotton candy I have had in my adult life, I’d say this was pretty good — but admittedly, I have never enjoyed cotton candy as much as I did when I was about eight years old.  Any kid would have been tickled pink, I think.

Some things to note… The air-conditioning in here is ridiculously cold.  I am never one to complain about cold but on this night, it was frigid in here.  Most any seat upstairs felt that draft.

Service was very good.  It wasn’t “French Laundry or Acquerello good” (and how many things in life are?) — but obviously, these people were trained well to provide a certain level of service throughout the dining experience — much appreciated.

All in all, Alexander’s is a good restaurant.  Unfortunately, it doesn’t meet my expectations to be “the best steakhouse in San Francisco” but it is good.  It is also, I should add, extremely pricey.  A5 and Lark Creek Steakhouse (which I must review next, I am reminding myself) are equivalent in price in most respects.

Alexander’s is located at 448 Brannan Street in San Francisco.  Valet parking is offered in front for a fee, and there is also a coat check behind the hostess.  I would recommend reservations as it was about 90% full on Friday night at 9 P.M..  If possible, request seating on the main floor to avoid the chilliness upstairs, and to be part of the busier action. The second floor, however, was amazing for privacy.

Ruth’s Chris Steakhouse in San Francisco Needs to Step Up