There are certain dishes that require a lot of pots and pans in order to complete. Given how much I cook around here, whenever I can minimize the number of cookware needed to complete a dish – I do.

A dish I enjoy making for this reason as well as how good it tastes is a bacon potato hash with eggs. The eggs in this dish will turn out almost exactly like poached eggs, but technically, they are steamed eggs, as you’ll see when we go through the steps in how to make this dish.

When making bacon potato hash with eggs — you can include other vegetables, too. I like to stick with one meat source for the dish — either bacon or sausage — or will sometimes skip the meat altogether if I don’t have any on hand. But I usually think of cooking this dish when I have an additional vegetable I want to feature in a dish. On this day, it was fresh organic green beans I had on hand, so for the purpose of this recipe post, we’ll be including green beans into this dish.

Mandatory to this dish as it’s shown is using a pan that has a lid. It’s impossible to “steam” the eggs without a lid!

Cooking a bacon potato hash is not really considered a “beginner” dish — but I’m confident that with detailed instructions — anyone can cook this dish. It’s really, really simple despite looking like it took a lot of skill. I’d like to say it did, but it’s really quite a no-brainer once you begin making it. It’s also quite forgiving; errors like slightly overcooking the potatoes or eggs can happen, but overall, it doesn’t ruin the quality of the dish, so give it a try over the weekend.

Heat up a pan with about 2 tablespoons of extra virgin olive oil. For this dish, while I show one batch cooked in my All-Clad saute pan — which is most definitely one of my favorites in the kitchen. But for some things — a non-stick pan is best.  it’s actually much easier in a basic Teflon non-stick pan. Unless you’re really savvy with oil, heat and potatoes — the potatoes WILL stick to the bottom of a stainless pan — and even then, sometimes it will still sick. Those wretched starches…

So heat up a nonstick pan with delicious olive oil. With Teflon, you want to put the oil into the pan when it’s cool and let it heat up with the pan.

Toss in a little pinch of salt and continue to brown, stirring frequently until they’re nicely cooked through.

As the garlic and onions continue to cook, toss in your bacon. Here, I’m using Hormel Black Label Bacon, which is one that I’m enjoying these days. It’s not too salty and something about the bacon flavor is smoother to the palate.

Given that you’re only using one protein source in this dish, use a good bacon. Choosing to not eat bacon is one thing, but don’t do something blasphemous like using a vegetarian bacon or a turkey bacon. This provides the meatiness of this dish — so if you’re making it vegetarian, leave it out, but if you aren’t — then go for a solid REAL bacon with a good amount of fat and salt. 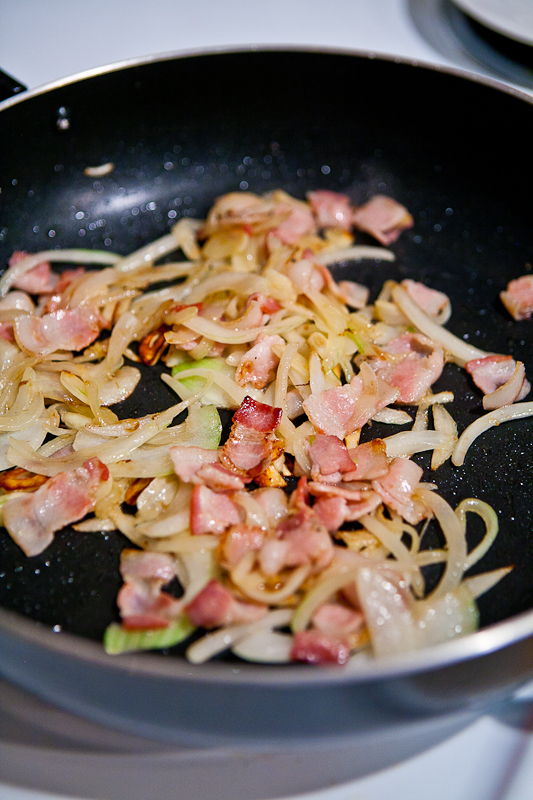 In a minute or two, on high heat, it should look like this. Once it looks like this – remove from the heat and put aside for a moment.

Alternatively, the way I did it for the first shot at the top (and the way I normally do it) was to fry the potatoes first, then add garlic and onions. I did it the way described above the second time solely to show what I believe is a way that decreases room for error. Up to you which one you use.

Now, in the same pan where you cooked the garlic, onions and bacon…

For this dish, I used 3 medium sized potatoes. I had prepped four but decided not to use one. How many potatoes you use will depend on how big your pan is. NOTE: the potatoes can only be a single layer flush against the bottom of the pan. Obviously, if you have a pile of potatoes each potato piece can’t touch the heat, they won’t cook evenly with the others.

Sprinkle with salt, peppers and in this case, I put some dried oregano in.

In general, you lay the potatoes in a single layer across the pan, and let them sit like that on high heat for about 2 minutes to brown, then start stirring them occasionally so all sides have access to the heat, but continue to cook for about 5 more minutes. These “home fries” will be done in about 6-8 minutes.

Once your potatoes are cooked through about five minutes, it’s time to toss the original garlic, onion and bacon batch back into the heat. As it’s been about five minutes now, they’ve cooled down, so give them a good stir for a minute to heat them through again.

I don’t like to cook my green beans through entirely in any dish. I like them to retain a little crunch especially in this dish because everything else is pretty soft. Hence, I toss them in the last minute and stir continuously for a minute or so to completely heat them through. Doing it this way will also help retain the bright green color — which this dish desperately needs at this point!

Now, gather all of your ingredients close into the center of the pan, leaving as little room as possible between each ingredient, as shown above.

Remember how I said your pan needs to have a fitted lid at the beginning of this post?

Here’s why. Now that everything is basically cooked through — keep the heat on high and crack your eggs into the pan. You gathered in the ingredients so as to help prevent the whites of the egg reaching the bottom of the pan and becoming a fried egg instead of a steamed egg. Once you crack the number of eggs you want into the pan, I put in about 2-3 TBSP of chicken stock to the pan and SHUT IT IMMEDIATELY.

Keep the cover closed for about 3-5 minutes, depending on how well you like your eggs done. DO NOT STIR and let the bottom brown. The liquid you added will keep it from burning.

I don’t recommend you cook any longer than this. Alternatively, while it goes against the one-pan idea — you can scramble eggs and lay it on top instead of this method, too. The taste will be just as good. Check out how I cook scrambled eggs here.

You can also crack the eggs and then throw it in the oven, but again — my objective here is to use one pot and keep this simple but delicious.

If you have herbs, chop them up and throw them in. Some herbs that go well with this dish are parsley, oregano, dill, or cilantro. I’ve included parsley, oregano and cilantro here.

I like serving plain toast with this dish. Sticking to the one-pan concept, I just throw them into the same pan. Also, as shown, I’ve cut up some avocado — which goes with just about any breakfast in the world, and are so good for you. 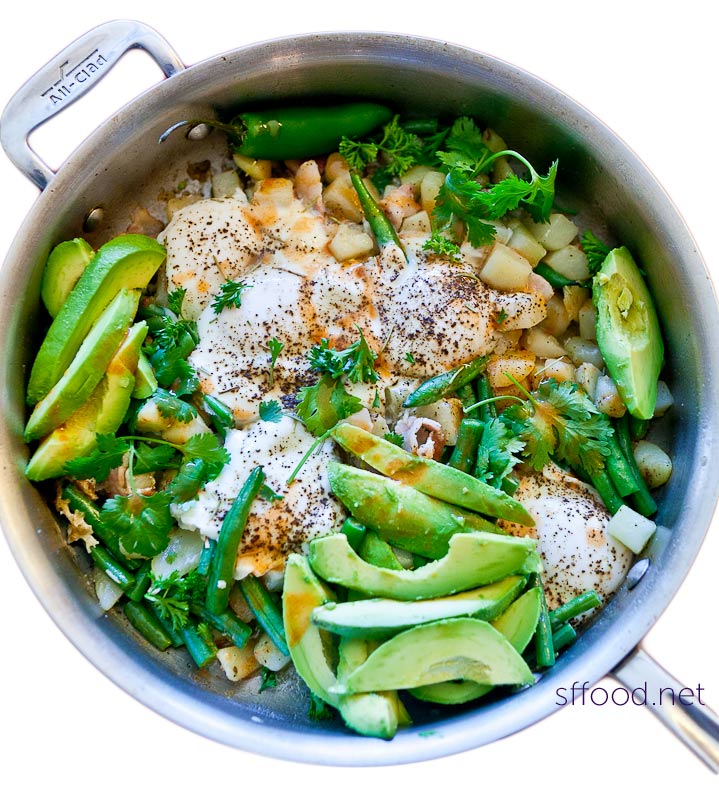 As mentioned,  you can toss in other vegetables easily into this dish. Corn, peas, cauliflower or even cut up broccoli would work nicely. The only vegetables to avoid are juicy ones like tomatoes (which release too much water to actually considered a hash, though you can easily lay some on top), or vegetables like eggplant that absorb too much oil to cook through. While you do include both olive oil and a little bit of butter in this dish — overall, it’s not meant to be so oily and everything should taste vibrant instead of heavy.

When serving, you can also put a dollop of sour cream on top for additional creaminess, or in my case, I put some Tabasco on top, which I prefer solely because the vinegar in Tabasco brings out the flavors in this dish.

As usual, here’s the recipe written out: 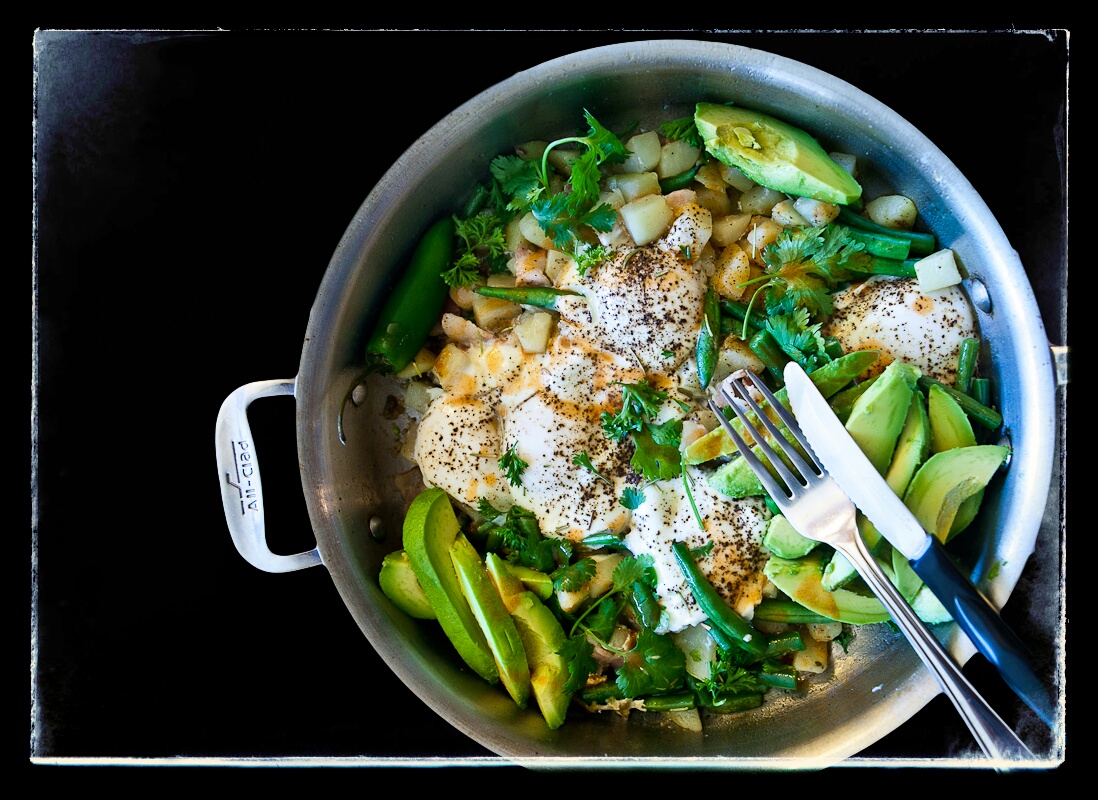 Author: Grace Keh
Cuisine: American
Recipe type: Breakfast
Serves: 2-3
Prep time:  10 mins
Cook time:  20 mins
Total time:  30 mins
Ingredients
Instructions
Notes
--Other than the potatoes, feel free to replace any of the other items with different proteins or vegetables.
--Optionally, you can toss on a dollop of sour cream for additional flavor.
--Serve with plain toast and sliced avocados, if desired.
3.2.1311

If you try it out, let me know in the comments below how it turned out, or if you have any questions before trying it out. I’m happy to help!