Contrary to what one might imagine, especially given what I do here and my love for all things food-related, I am really not keen on visiting the “newest and hippest” restaurants in any city. Sure, with a bar or lounge, I want to be in that door before it’s even open to the public, but with restaurants, I like to wait a good six to eight months before visiting, and even then — only if everyone else is raving about it. My role is to assess service, food and how wonderful or horrible everything is–and to give a restaurant fair time to settle down is usually the best bet, so as not to be unfair.

Given a limited amount of real estate in the stomach and only so many calories a person can consume in a day, each precious bite of food I take should taste good. There’s simply no reason to eat things that don’t taste good! For me to go “try out” a new place only to be disappointed is such a waste of space and time especially in a city like San Francisco where great food is rampant, and I could revisit every place I know I love for a whole year and still not visit the same establishment.

I’m loathe to be the lab rat, testing out new restaurant food on myself.  Well, one photo of homemade head cheese on my friend’s Facebook profile and I caved.

Mr. FK and I were right in the middle of  an email thread, picking a place for dinner when I decided that I, and by association, he, would be the lab rats for Boxing Room. It was especially appropriate as he was born and raised in the South!

Upon entering Boxing Room, it’s easy to appreciate the space. It’s wide open with modern and minimalist decor mixing wood and steel but not harsh in feel; the warm hues in the room were comforting. From the front, I could see into the kitchen, and tables were spread throughout just far enough apart to give each party some space.

Immediately after being seated, we were offered water and then crackers, in lieu of bread, were served with a pimento cheese butter/sauce. (Shown above.)  The crackers were thin, crunchy and bland, and with a bit of the cheesy and tad salty spread on top, it made for a perfect bite that instantly made your mouth water for more. It has a mild kick to it, though far from spicy–perhaps Worcestershire sauce? Had I not the intention of trying half the menu with only one dining companion, I’d have finished a few baskets of these.

Since it was one photo of head cheese that got me to  Boxing Room not long after it opened, and the Hog’s Head Cheese was the one thing I knew I was going to order–above. This particular meat concoction was different from what I expected in texture–the head cheese I have tried are fattier and greasier whereas Boxing Room’s was meatier, but also a bit drier. But a spread of the mustard onto a chunk of headcheese with a slice of the pickled okra – and all the flavors waltzed around your mouth, ping-ponging across all flavor notes, hitting salty, sweet, sour and savory. It was the perfect size to share between two to three people as small bites prior to appetizers. 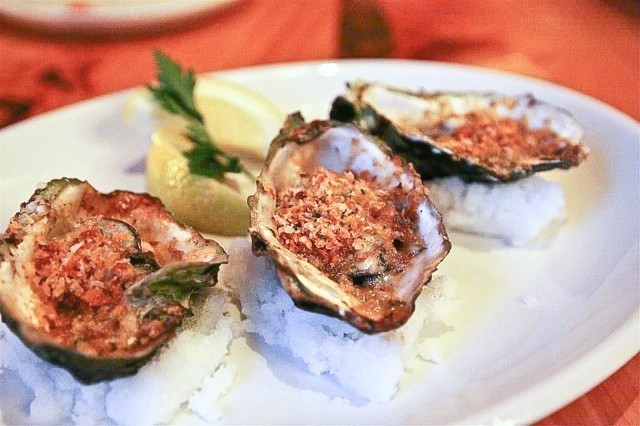 I’m a fan of simplicity, and Boxing Room’s Baked Oysters were just that. Take a plump, sweet and fresh oyster, top with garlic herb butter and some fine breadcrumbs, bake until the outside is toasty but the middle of the oyster is still juicy – and serve it with lemon. They could have been a tad less baked for my own preference, but then again, there’s a good selection of fresh oysters I decided not to try this evening in order to taste the “cooking”. I imagine most folks who order cooked oysters prefer them actually cooked through?

Now I don’t profess to be a connoisseur of Southern or even Creole cooking, but I do know good taste in food better than most human beings. I’ve also had quite a selection of “gumbos” here and there and it’s never even left a mark in my memory as having been notable, never mind unforgettable. Some have been downright inedible. But Boxing Room changed that on this one night by offering one of the most savory bowls of food, with a soup base that was so deep in taste and infused in flavor, dark in color with each ingredient from the delicate chicken meat to the stronger taste of the Andouille sausage highlighted in each bite of the gumbo. Mixed in with the rice, this dish was phenomenal.
(So much so that I requested the recipe for inclusion in my book and Chef Justin Simoneaux wrote it up for me!)

Just when my palate was ready for some freshness, the crab salad with asparagus was served. Thinly sliced long pieces of fresh asparagus were intertwined with frisee and crab meat, and served with a lightly boiled egg. The dressing was anever-so-light lemon vinaigrette, coating everything just enough to let all the subtle flavors of the ingredients shine through; this would make anyone a delightful start to a meal.

But I wouldn’t be me if the sight of a meat I’ve never tried didn’t force me to order it, and the deep-fried alligator was up next. We’ve all heard about alligator meat being consumed in the south, and after the previous courses we’d had, it seemed a fine place to try it. Mr. FK said that if it was cooked well, it would taste like chicken but would be drier — so I knew what to expect. My inherent dislike of all things reptilian or even appearing reptilian wasn’t helping at all.
Served with a remoulade, I doused lemon all over these things and dipped it into the sauce. The slight hesitancy I felt reminded me why Andrew Zimmern has the show and not me, and took me back to the moment I couldn’t eat “stinky tofu”.  Epic failure that night, but I was determined not to repeat it tonight.

These things weren’t just like chicken, but in some respects, better than chicken. Even Mr. FK was surprised that they weren’t dry and between the breading and the meat, there was a slight discernable aftertaste that made it known, “I am not chicken”, but the texture of the meat was meatier and more interesting than chicken. For lack of a better way to describe it, each bite had more “bite”, if that makes any sense.  Much like marlin versus tuna meat, when deep-fried, it can be said that marlin beats out the texture of tuna — and so it goes with alligator versus chicken, I suppose. We finished off this plate, too.

When you think of Southern cooking, there’s no way to not think of fried chicken. I was excited to try the corn maque choux it came with as the combination of chicken, mashed potatoes and the maque choux sounded divine. The breading on the chicken was quite hefty, and the meat on the inside retained much of its juices. With one bite of the chicken and a spoonful of the slightly sour buttermilk mashed potatoes – it was any man’s dream come true; the addition of the maque choux, however, took this dish across the finish line. The heaviness and weight of the chicken and potatoes was successfully broken apart into lighter, more palatable and enticing bites of food with the addition of the maque choux. The corn, bell peppers, and tomatoes, in the slightly sweet and playful base made for the ideal combination.

And what Southern meal is complete without a taste of good ol’ Flounder? Boxing Room’s was seasoned and cooked to a nice brown on the outside, and the flounder meat was moist and tasty. The beans and potatoes were the ideal counterparts to this fish to make sure nothing overpowered the delicate flavors of the fish, and the lemon, of course, brought all of it to life. After the heavier fried chicken, this was a really fresh and light ending to the meal.

What more is there to say about this?

Pecan pralines adorned a large scoop of vanilla ice cream, with Brown Sugar Blondies throughout! For those of you who haven’t tried this, it can only be described as “heaven’s brownies”, soft and crumbling with a noticeable brown sugar texture, reminiscent of caramel but not quite. Use your imagination to figure out how that one tasted.
As for the banana cake, the cream cheese frosting was light while the bourbon ice cream was rich and powerful. The combination left absolutely nothing to be desired.

The young and talented Chef Justin Simoneaux heads up this kitchen and his Southern roots are put to good use here. Indeed, it’s best that we cook what we know, and this chef understand Creole cooking. Boxing Room is a new and welcomed gem in Hayes Valley and for once, I’m glad I was the “lab rat” for this restaurant. My review is months late, but since then, I’ve only heard good things about Boxing Room from friends and subscribers to SF Food.

It should also be noted that service here was exemplary. Despite it being new, they had their act together and while it was a nearly full house on the evening I visited, our order was taken correctly, served in a well-timed manner, and we never wanted for a refill or any assistance without being served immediately.

Reservations can be made via OpenTable — and the website is also quite creative and worth a visit.
Boxing Room is located at 399 Grove Street and has late hours to midnight or 1 AM throughout the week; check the website for more details.