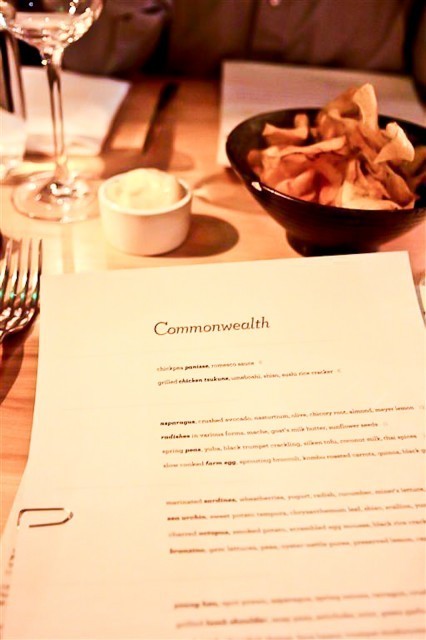 Chef Jason Fox heads up this hip and modern American restaurant in the Mission. Setting up a restaurant in the Mission is a tough feat; patrons go to the Mission expecting good food, but the food really does have to be good to make us risk our well-being and physical safety again to revisit. Furthermore, they had to completely overhaul the old and rundown location of the El Herradero Mexican Restaurant to put up this casual but really sleek restaurant.

Last week, my favorite foodie friend in the world and I headed to this restaurant. Some things will pass my discerning tastebuds and leave him nodding in tempered agreement, at best (for example – Yank Sing), and other restaurants will exceed his high expectations but hardly register on my food radar. So, it’s always interesting eating with Archie because I know that if I happen to be raving about something due to sheer hunger, his tastebuds will quickly kick in and save the day, bringing me back to my senses.

But God be with the restaurant when the two of us visit together because you HAVE to serve pretty great food to pass. Given the hype about Commonwealth lately, I thought this was the ideal location for us to have our long overdue dinner. Standing right in front, we slapped our hands together and said, “Alright, let’s go see what the hype’s about.”

Walking into the restaurant, we were greeted by the host and it turned out our table was ready, despite it being a full house at 8:30 PM. The location is a bit on the smaller side, and they really do pack the tables in like sardines. For instance, I know the table next to me had one disgruntled Cisco employee, and the friend he was dining with had a lot to say about politics. To my right was a couple, dining on good stuff, and despite having heard most of their conversation without even trying, I’m not sure at this time whether they were on a date, or just friends. It really is packed in, and being in the middle table was a bit disturbing.

Our server was one of those women who were friendly enough, but not quite warm; she gave us our menus, and then soon thereafter returned with freshly fried potato chips with an aioli-like vinegar foam of sorts for dipping. The chips really needed for nothing — and the foam, while an interesting twist, was too “foamy” and not substantial enough to really adhere to the chips and enhance them.  Knowing we’d be having a feast, I noticed we both controlled ourselves with the chips.

At Commonwealth, you can’t just have one appetizer and one entree like you might elsewhere. It’s almost like an American version of tapas here, ordering small plates all across the menu. According to our server, the average was 3 plates per person, and each dish cost somewhere between $6 and $16, if I recall correctly.

First up for the evening was the Chicken Tsukune, which, as it turned out, was more of a chicken meatball of sorts. It was seasoned really nicely to eat without any carbs, unless you count the sushi rice cracker as a carb (which I don’t), and the umeboshi sauce that accompanied it really highlighted the flavor of the chicken. For $6 per order, and  considering it is chicken and not beef, I considered it a bit overpriced for what was given.

There was no doubt this would be ordered — and the egg was obviously cooked perfectly. Most wonderful in this dish, almost stealing the egg’s thunder, was the quinoa. Some say quinoa is the world’s perfect food — and this grain (which is actually the seed of a spinach-like plant) is full of protein and amazing in texture. It’s chewy, and pops in your mouth to some degree, and with a really subtly distinct flavor, the quinoa went beautifully with this dish that was overall very subdued but delicious.

The star of the evening was the pork jowl dish, which was a truly euphoric combination of a variety of ingredients! Commonwealth’s pork jowl, as it turns out, makes pork belly look ghetto; the way they cooked this part of the pig retained all of the juices and flavor while really enhancing the minimal amount of fat in the jowls. I’ve since had pork jowls at two different places and none compared  to Commonwealth’s. Fava beans being one of my favorite things, I was delighted to see it included in this concoction, cooked perfectly and full of flavor. If you get one thing at Commonwealth, this has got to  be it!

Much like the combination of sweet potato, uni and those specific greens, the charred octopus was impressive for the playful combination of textures and flavors but also that the chef kept the octopus as tender as possible. Combined with the scrambled egg mouse, which really tasted just like that — this dish was lively and creative, and after the pork jowl was perhaps my favorite at Commonwealth.

But — most telling was that after all these dishes, Archie and I were “substantially full” — which meant, we are willing to stop eating but we’re nowhere near the realm of really full. Health-wise, this is great; this is perhaps how much people should eat all of the time, and stop right here.  But the reason I note this is not to discuss my appetite, but rather, for the cost of the food, which was well over $60 worth of food at this point, with a bottle of wine, we weren’t necessarily full. For those of you who want to come and eat heartily, this place may not be for you unless you intend to shell out over double this amount.

We decided to order dessert, too, which are all $8.

Now we had already decided to have the peanut butter semifreddo once we saw the menu, but the couple (or non-couple?) next to us urged us to try the “thyme ice cream”. They swore it was delicious, and while it doesn’t even sound delicious to me, knowing thyme and what I expect of ice cream — I’m nothing if not willing to try “weird” so we ordered that, too.

Thank goodness we did, too, because that was the dessert highlight. Who’d have thought this flavor in ice cream would work so nicely? And piled atop chunks of lemony sponge cake, with creme fraiche tossed here and there, this dessert was nothing short of phenomenal.

The peanut butter semifreddo lost all its glory instantly, and slumped to the background. In the end it was the only thing we didn’t clean off the plate, and it wasn’t because we were full; that dessert just really wasn’t particularly tasty or interesting.

The final bill came to $140 before tip, and that included a $50 bottle of wine. Commonwealth also offers a six-course tasting menu for $65 per person (which is apparently a price hike of $5 from their original prices when they first opened), but we didn’t order this for two reasons. First, if one of us ordered it, the other had to have it too, and given my reason for being there (to review for the book and blog) — the more variety I tasted off of their regular menu, the better. Second, on that night, in any case, with a couple of exceptions, it didn’t read like it was tastier than the regular menu. Commonwealth, however, donates $10 of every $65 spent on the tasting menu to local charities and nonprofits. It’s an additional $30 to include wine pairing. Essentially, for one more entree between the two of us, it would have come well over $200 if we included the wine pairing — and according to others’ reports, you still wouldn’t be full.

I’m a bit mixed on how I feel about Commonwealth right now. I would go back, and I would be happy to try most of the dishes again. That said, it leaves me feeling it’s neither this nor that. Chef Fox offers some really creative and flavorful cooking fit for most high-end restaurants, but the ambiance is most definitely casual.  I mean, I don’t come to this type of a restaurant to eat a $400 dinner for two. Serving size makes Michael Mina look hearty, and while it’s not as pricey as Mina, it’s not really low-cost either if you want to be as full as you get at Michael Mina. Then again, for a couple of people who want to try dish after dish, Commonwealth does allow you to pick and choose from a good menu, and if you go in knowing this, perhaps you should order 4-5 dishes per person, which could run up costs pretty high. To share, the maximum number of people who could share these dishes were two per plate, in my opinion.

Amongst the ridiculously large number of new restaurants on the San Francisco food scene, I don’t know that I’ll be revisiting Commonwealth really soon. The food was good but it didn’t leave the mark on me that Wayfare Tavern did, or the impression that Cotogna did, or the ambiance that Prospect has — which are all relatively new to San Francisco.

I think I’ll give it another year or so to let them find their legs before I revisit.
I’ll miss that pork jowl, though.

Get Messy, Get Delirious: Craw Station in San Francisco