I’m going nuts these days, running to a new restaurant every single night in preparation for writing the book, “Food Lovers’ Guide to San Francisco” (Globe Pequot Publishing). Craw Station was put on my radar a little while back, but I hadn’t visited as of yet because the last time I visited a brand new place, they had failed miserably. (See Shabu Pub review.) 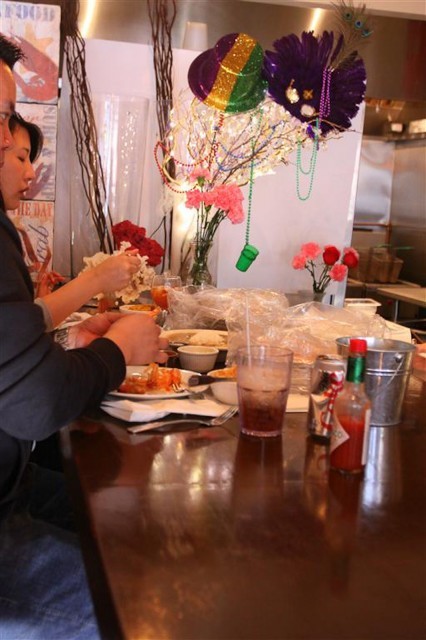 But this year, for Mother’s Day, my girlfriend YC insisted she was taking me out and she asked if I had tried Craw Station. This being a restaurant on my list – yes, I have a spreadsheet for this — of restaurants to try, I decided to oblige her. Besides, her mom is in Korea and I’m the closest thing thereafter, so why not, right? The place, like many others, advertises “spicy” — and words like “Dynamite” are used. Fool me once, right? I walked in today expecting not much at all.

At 5:30 PM, there was already a waiting list, and we were told it’d be about 20 minutes of a wait while they took our phone number to call when the table was ready. As promised, the call came but the only place they could seat us was the bar, which was fine.

Reading the menu was exciting. Not only do they offer fresh oysters, but deep-fried oysters, deep-fried catfish with tartar sauce in addition to many other items that read beautifully. As many of these items were ordered by the pound, it was hard to conceptualize just how much, or little, we would need. The crawfish is available for market price, and on Mother’s Day, it was about $10.50 per pound, if I recall correctly, which is a bargain. The shrimp was available for a flat $11.99. So, in an effort to try as much as possible with limited stomach real estate, we tried the following: 1 order of deep-fried catfish 1 order of spicy cajun crawfish at DYNAMITE spicy level 1 order of spicy cajun shrimp, also DYNAMITE 1 bowl of rice (as I cannot do without) 1 order of corn on the cob (what YC wanted, which was then cooked inside the shrimp bag) 2 glasses of sangria (in hopes of putting out the fire) 1 order of the pasta 1 order of the sweet potato fries. Alright, let’s be clear about one thing. When Craw Station says DYNAMITE, they really put in the effort to make it as close to dynamite as possible. We asked the owner once, twice, three times to make sure it’s really spicy — and the kitchen delivered what could only be described as DELICIOUS FIRE IN THE MOUTH!

Now let me sidetrack for a bit. I came in today after a really, really rough three weeks.  I didn’t want to go out, and I have a few enormous weeks ahead of me — and I really had no intention of posting a blog post for at least that amount of time. YC basically had to drag me out of the house to go out today, and I was just drained and exhausted. I dipped my fork into the sauce that surrounded these little crustaceans and I’m not joking when I said that a smile came to my lips and my mood almost instantly lifted.  I’ve always maintained that spicy food makes me a nicer person, and let’s just say, I was about to become really, really nice.

The sauce which enveloped the shrimp was slightly milder, but for basically any normal person, both were seriously spicy. It’s a jabanero-based sauce, and I am normally not a fan of habanero. But never in my life have I tasted habanero that was this fiery while retaining flavor, and the owner explained to use that they use only the highest quality habanero peppers, as otherwise, it’s just heat. I really had no idea I love habaneros until tonight. I ate/drank/sipped/devoured more of this sauce than should really be legally allowed. I poured it over rice; I sucked it off the crawfish, I peeled shrimp and dipped the whole thing back into the sauce; I even poured it on the butter / roe pasta prior to slurping it up.

As we sat there slurping and sucking the juices out of little critters, about 30 minutes had passed before any words other than “Oh my GOD!” or “Wow!  WOW!” were exchanged. In fact, I said something at one point and when I looked at my dinner date, she was so busy that I decided to drop it. My suggestion is to always order a bowl of rice. As good as the crawfish is, and as perfectly cooked as the shrimp was, if I were not so full, I’d have had one more bowl of rice with this delicious sauce. HUGE chunks of habanero rivaled only by the large chunks of nicely cooked-through garlic, I’m not sure anyone can replicate what Craw Station does perfectly.

The house spaghetti came out soon thereafter. This is a lot like Craw Station’s take on the Mentaiko Spaghetti but with tobiko roe and a light butter sauce. It does what it can to balance out the spice of the crawfish sauce.  You find yourself just stuffing spaghetti in your mouth in vain — and it’s quite tasty, though my preference would be for noodles cooked a tad less. The flavor and combination rocks, though. But halon itself could not really put this fire out. Not that we wanted this fire put out. In fact, my girlfriend and I took intermittent glances at one another and just giggled, as we were nearing delirium from the spice. A couple of times, I said something to her, and she didn’t even hear me as she was so busy sucking on crawfish and licking her fingers, she forgot all about my being there, I suspect. As we huffed and puffed (fumes like dragons, no doubt), we finally reached a state of euphoria.

You no longer feel your lips; your head breaks out in a cold sweat; you hear nothing; you see nothing; goosebumps emerge on your arms and backside; the back of your neck goes ice cold while your stomach heats up to a ridiculously high temperature; and your mind goes blank as all of your problems get wiped away from your mind as sheer pain takes over. And you can’t help but laugh. The sangria was good, though it really didn’t taste anything like alcohol. It was more of a delicious juice, infused with fruit, and again, acted as a tasty but completely useless extinguisher. It tasted like a mix of red and white wine — which is nice, considering most places offer red or white, and this had the best of both worlds.

If you don’t like, or can’t handle spicy — you obviously have other options here as plenty of other tables ordered mild and it looked just as good. But for those of you who, like me, love truly spicy foods — there’s virtually nothing in San Francisco that I can think of that beats this, with the exception of “On the Bridge” in Japantown, but that’s curry — and they are completely unreliable when it comes to spiciness. When I need my spicy kick, I’ll be coming to Craw Station, for sure. Especially when I have problems or thoughts I can’t get out of my head. Craw Station can do in one sitting what could potentially takes years of therapy; it just blanks your mind out totally.

With all of the spicy goodness, you do need some carb sources to balance it out. I think my first preference is the rice, available for $$1.50 each, but I saw many of the gumbo with rice going out, and that is on my radar for next time. For those of you who prefer pasta or potatoes – the sweet potatoes above would suit you well, but neither the pasta nor the fries absorb the intense flavor of the sauce like the rice does. It’s quite impressive how the seafood and sauce will stay ridiculously hot in the plastic bags in which they are served. Between the actual heat and the spice of the heat, go to Crawfish dressed in clothes in which you can (1) splatter, and (2) sweat; at some point, you will become so delirious that you just might wipe your soaked hands on your shirt. 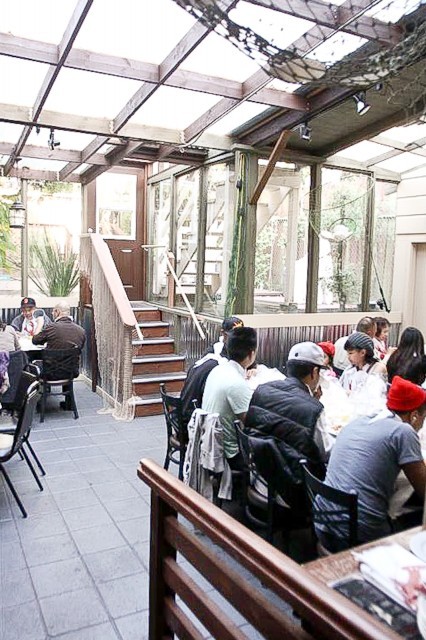 I’m a firm believer in supporting GOOD local and privately-owned businesses, and I am of the school of thought that those restaurants offering good food with good service deserve success. With most restaurants, your neighborhood folks are the ones who spread the word and build your customer base — and treating them well, like family, does you absolutely no harm. When you, like the owners of Craw Station, want to succeed and cater to your customers like family, as they did us — it’s inevitable that I, along with everyone I intend to take here, will become loyal customers. With this outdoor patio, you can rest assured that I will be planning many group dinners here in the future. The place is just ripe for rowdy and fun get-togethers with great food and good beer, sucking on the spiciest seafood ever.

Next time, I intend to try the raw oysters and the spicy cajun clams, too! For parties of 10 or more, they take reservations, but for smaller parties, you will have to try your luck. Even during our two hours there, we witnessed them politely explaining to at least six parties that the wait would be over an hour, and plenty of people waited outside to be seated. YC and I pigging out on more food than we should have been didn’t help the waiting situation at all, but we couldn’t stop eating.

Try Craw Station. And I give you a SF Food DARE: do try the DYNAMITE, extra extra spicy a la Grace, and let me know if you live to tell about it! ;-) THANK YOU for an exciting and exhilarating dinner, Craw Station — I absolutely LOVED it!

"Seven Courses of Beef": Anh Hong Restaurant in the Tenderloin