Located in the Bernal Heights area of San Francisco, a neighborhood I rarely frequent, is a small and extremely casual restaurant called Emmy’s Spaghetti Shack. This was one of those places I had visited some time ago, but prior to San Francisco Food, and last night, I revisited for the first time in two and a half years or so to take photos and post my official review. 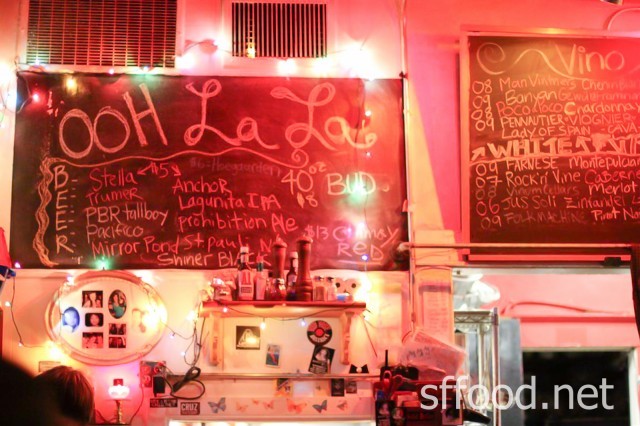 Anyone remember the song “Love Shack” by the B-52s? Well, perhaps because of the name “shack”, this place always reminds me of that song. It’s a really dimly lit place with red lighting throughout, making the place feel have an underground type of feel to it. On my first visit, I made the mistake of taking a 5 year old child with me — and quickly found the place rather inappropriate for children, despite the name, “Emmy’s Spaghetti Shack”. 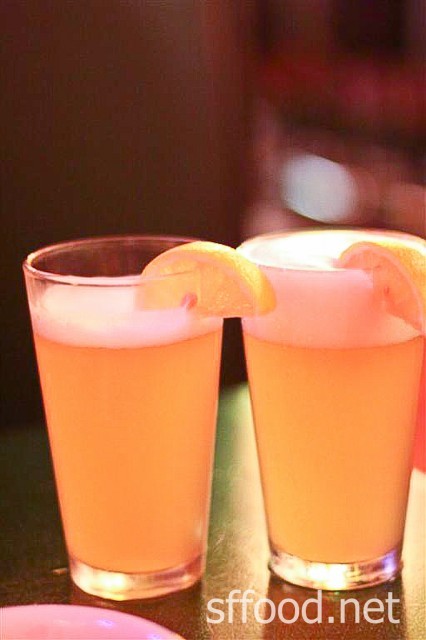 The mood and the servers here are all rather funky, quirky in their own way, and altogether rather eclectic and cool. While platform pants and beehive hair were not spotted, it was clear that Emmy’s was not a place where stuffy and prissy people work. Our female server last night was everything I want in a restaurant server — she got the order right, gave us our options, kept us filled on water and essentials, and checked in on us once with a smile.

Emmy’s Spaghetti Shack has a full bar, and they have a nice selection of good beers on draft. My choice for the evening, as is usually the case when I find it, was Hoegaarden. For anyone who hasn’t tried this beer, it’s one of those beers that even beer-haters can enjoy to some extent with minimal carbonation and a light, fruity flavor. I thought it would go nicely with what I remembered as a really good plate of spaghetti and meatballs that I knew Emmy’s offered. But last night confirmed in my mind why I like to visit most places twice before reviewing it — especially when I can space those two visits apart six or more months apart. On my last visit, I had one taste of the spaghetti and meatballs and was immediately impressed. I finished the entire bowl of spaghetti and declared it the best in San Francisco. Coming back this time, especially since it was Mr. K’s first time to the restaurant, I was raving about how simple and delicious this spaghetti was, and how he, the lover of all simple foods, would love it. While I would have loved to just order two spaghetti and meatballs for us — alas, having a food blog means that if it can be helped, everyone should order something different so I can taste it all. So, after being seated, he picked the spaghetti and meatballs ($12.95 – and $3 less to order without the three meatballs) with a small order of garlic bread ($4); I decided to try the Pulled Pork Ragu with Pappardelle, which was a smaller pasta dish under the appetizer section ($9.50) along with one thing I never seem to be able to refuse when it’s on the menu: Baked Polenta ($9).

First up was the garlic bread. It consisted of three slices of bread, nicely toasted, but rather weak in the garlic and butter department, sprinkled with parsley.  I make garlic bread all of the time, and I am quite certain that it should taste more garlicky and buttery than what Emmy’s makes, but the garlic-shy folks of the world might disagree.

Next up was the pappardelle dish. The pasta itself was decent, and at $4 less than the spaghetti and meatballs, I found the portion to be decent for most female appetites, and too small for most men. That said, I think the chef at Emmy’s Spaghetti Shack forgot to use an important ingredient: SALT! The ragu was actually not bad, though I would not go so far as to describe it as “phenomenal” or anything, but it seriously lacked salt. After pouring salt all over the dish and tasting it again, I felt that the dish was pretty decent. The pappardelle, which is a really wide fettuccine noodle, was decent, but lacked what I can only call “freshness” as it didn’t taste like noodles made in-house; it tasted and chewed more like pasta out of a box. (Note: Emmy’s menu doesn’t say it’s homemade either; I just like pasta tasting a bit fresher and more “alive” than what this pappardelle offered.)

This was the greatest disappointment of the evening. Who am I kidding — this was the greatest culinary disappointment in 2011 thus far — and that includes epic dining failure at Shabu Pub! First off, I am against any sauce drowning out subtle flavors of other ingredients. If you have an overwhelmingly powerful sauce, then make sure to put only a small amount on it to preserve the other flavors in a dish. At Emmy’s, the poor polenta was completely covered in this “puttanesca sauce” — which would have been less of a tragedy had the sauce actually been good.

Puttanesca, literally translated, means “prostitute” in Italian. The story goes that this is “a whore’s favorite meal” though logic would dictate that this makes no sense at all. In any case, it’s supposed to be a tomato sauce with anchovies, black olives, garlic, and capers that bring the highlights to the sauce. What this sauce tasted like was more of an olive tapenade type of sauce — with brutal and ugly sour notes that do not mix with polenta in any way. I did my best to scratch off all of the sauce and taste the polenta, but I could not kill that taste. I proceeded to slice off all the outer layer of polenta (essentially, all the baked portions of it), and STILL, I could taste the sauce!

Then again, the polenta could have been baked to a softer consistency, and in the end, I put my knife down and gave up. Some polentas are not meant to be consumed.

Finally, the dish I’d been waiting for arrived; it looked as gorgeous as I remembered it. One bite into the meatball and it was exactly as I had remembered it with great taste and flavor, and cooked perfectly. It was soft in texture, and not too dense — and combined with the acidity of the sauce, the meatballs are just good.

To be clear, though, this is a spaghetti like your mom (if your mother was a great cook) would make; it’s not the spaghetti one would expect at other finer dining establishments — and that’s the whole point of Emmy’s Spaghetti Shack. They offer simple meals like one would expect out of “mom’s kitchen”, at reasonable prices in a very casual atmosphere. I think if the spaghetti was offered at $10 or less, I’d visit this place often and order JUST this dish as it’s comforting and rather tasty. 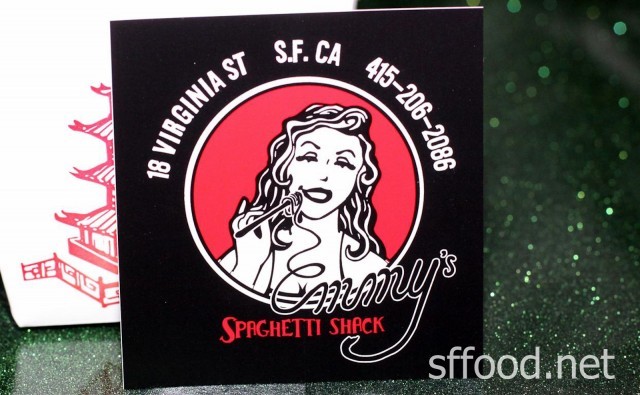 All in all, while it was a letdown compared to my first visit, Emmy’s still has pretty good spaghetti. The service is friendly, and the mood is casual. The music is pretty loud here, and on weekend evenings, it tends to get really loud where dinner conversation becomes difficult. Last night, it was at a reasonable volume and we had no problems conversing throughout the meal.

With two beers included ($12 for two), the meal came out to $58.00 not including tip — and that, I consider to be a bit much for what Emmy’s offers. The quality of the meal felt like it should cost approximately $30-$40 at most for two people, including the beers. That said, the spaghetti portion is really quite hefty, and we had leftovers to take home even with full stomachs.

In the end, I found myself talking about Spaghetti Factory, and wishing we had one close by. (Yes, even *I* like Spaghetti Factory!) Like Emmy’s, Spaghetti Factory offers simple spaghetti and meatballs with good bread and really low prices — and overall, it’s a better deal. Then again, the meatballs at Emmy’s were incomparably better, though the bread they offered was sub-par, at best — and added nothing to the meal experience.

Emmy’s Spaghetti Shack is located at 18 Virginia Ave at Mission. Their rather haphazard website can be found here with a copy of their scanned menu. They are opened until 11 PM on Sundays-Thursdays, and until midnight on Fridays/Saturdays. Go for yourself and give it a test run. Order the spaghetti and meatballs — and let me know what you think. Just whatever you do — do not order the polenta! That sauce was despicable!