San Francisco Bay Area Restaurants
December 20, 2010
by Grace Keh
30
[alert type=red ]Update 12/25/2016: This is the saddest restaurant news of 2015 for me. Ino Sushi is now closed; Inoue-san has retired. There’s a new restaurant called An Sushi there now but I am distraught that I won’t be able to try the always perfect and always authentic sushi by Inoue-san anymore. There was nothing quite like it outside of Tokyo. Thank you for the 9 years of delicious meals, sir![/alert]

I have been to Ino Sushi now perhaps 30-something times over the course of the last few years. When all is said and done, it remains as my favorite sushi restaurant in San Francisco.

While I have been to sushi bars in Japan that at least rival the skills of Inoue-san, I have yet to go to one Japanese restaurant on either coast of this country that could hold a candle to Ino Sushi.

Nigiri isn’t just about the fish, you see.  There’s a combination between the taste of fresh fish put atop the perfect sushi rice that brings the flavor of fish to life. The temperature of the rice, the texture and consistency of the rice, and exactly how sticky that rice is or isn’t — all of these things make a monumental difference in the taste of sushi.  Having fresh fish to even be considered as a “good sushi” to me is a given; but offering me awesome fish without the perfect nigiri rice is like being a fantastic photo with no frame; the world’s best lover without a lover in sight; or a great dancer with no partner to show off your potential. It can still be great sushi, but it can’t touch greatness in my book.

At Ino Sushi, you get all that and then some.

The restaurant is tiny.  It seats, at best, 25 people or so.  It’s located inside the mall, and has no outside signage.  You just wouldn’t drive by it and accidentally pop in, and even if you were strolling through this mall — chances are that you will walk right by without knowing about this treasure as it doesn’t even have a window to make you notice that a Japanese restaurant exists in here.  They close on Sunday and Monday, and with regular hours (and last call at 8:30 PM), there is really a limited amount of time in a week where one is able to try this amazing restaurant.

But once you do find it, your preference for sushi changes forever.  Inoue-san, the owner and master behind this artistry, will serve up some of the greatest omakase you have ever had.Each piece he slices is absolutely the freshest fish you will find in San Francisco; you taste quality in each piece that you will be hard-pressed to find elsewhere.  He has some fish here that you don’t readily find at other Japanese restaurants, like Engawa, or Pike — but even the choices you find anywhere else like Maguro and Uni is stellar at Ino Sushi. 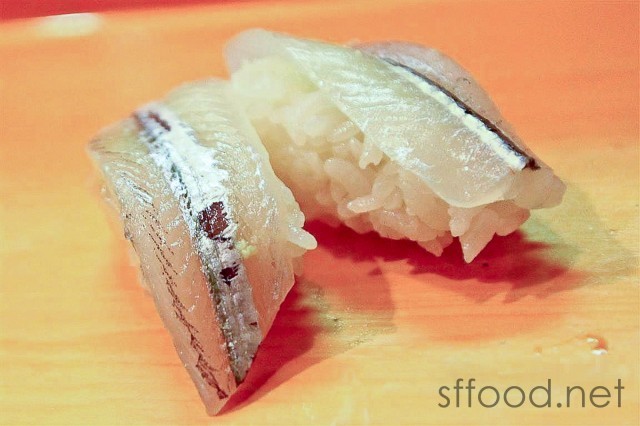 And then there’s the stuff he prepares himself.

His Ikura makes even typical “salmon roe haters” reconsider this delicacy and become a fan. His Ankimo, which is monkfish liver (pictured to the right) is phenomenal. Since the first day I ever tried Ankimo, I have tried Ankimo almost anywhere it’s available on the menu, and it’s almost always good, but Inoue-san’s Ankimo is in a class of its own. This would be a contender for my last meal on the planet. The plain liver of monkfish becomes a worthy opponent to foie gras in flavor and richness once Ino-san is done preparing it. He offers this as sashimi or nigiri — and while I love it as sashimi, too, the combination between this, a piece of nori, and the sushi rice makes it simply phenomenal. You can’t miss this order when you try Ino Sushi.

He usually carries freshwater and seawater eel, and both are as amazing as you will ever find.  Cooked perfectly, it maintains all of its freshness, and is served piping hot.  It simply oozes with flavor and moisture, and invariably, people will moan as they chew through this amazing dish.

I’ve introduced various people to Ino Sushi, ranging from people who claim to know good sushi to people who existed on this planet believing they did not like sushi. All have walked away from this restaurant absolutely loving the food. My last visit was with my high school friend who came to town from New York and took me to dinner, and he stated, “That was the best sushi of my life!”  That’s him shown above, enjoying a piece of Toro at Ino Sushi.  It was his first time trying the Ankimo, which he absolutely loved. He was already an uni-lover, so he needed no convincing to try it at Ino — and he was duly impressed. The transformation was when he tried Ikura, which was never one of his favorites, but he acknowledged that Ino-san’s Ikura is simply different. It’s not fishy; it’s not sticky; it’s just fresh and clean-tasting with no lingering aftertaste. We drank outstanding Kikusui sake (and at $15 per big glass, it better be good), we went to town on this night trying basically all the choices. The Saba at Ino Sushi is simply AMAZING. (Unfortunately, I don’t have a photo of this right now!) Mackerel is one of those fish that naturally have outstanding taste, but due to how fast it can spoil, it’s only those of us who fish who have had a chance to eat truly fresh mackerel.  Most others, especially in restaurants, don’t have a choice but to eat cured mackerel.  The fish is heavily salted, then cured in rice vinegar to prevent it from spoiling before it is served.  While always one of the cheapest fish available, it truly is one of the best-tasting when prepared properly.  Not surprisingly, Inoue-san makes one fabulous mackerel, cured perfectly.  Once in awhile, he will wrap it in vinegar-infused white seaweed, and the combination of the fish, seaweed and rice is truly enough to make me think, at least for a minute, that I could die a happy girl right then and there.

The logic of Omakase at Ino Sushi

Call me a snob but I am just not big on going to sushi restaurants and placing an order. The chef knows better than anyone else what is best in his selection, and once you establish a relationship with him — I like to trust my entire experience to him.  It’s a give and take; the more you go, the better knows and understands your true appreciation for good taste, and the more often you will be given the best he has on that evening.

On some mass food review sites, you will find some unappealing reviews of Ino-san, though all will agree that the fish is phenomenal. You have to understand that the experience here is not about service; it’s about a master of sushi offering you something you can’t easily have elsewhere.  He prepares the nigiri and you get to pay for it and eat it – simple as that.  You don’t go here expecting awesome service; you go here expecting to be treated to a sushi experience of a lifetime.

While I am big on restaurant staff and owners “making” the experience for the customer, at Ino Sushi, I expect and demand only one thing:  the best sushi ever.  Handing him your trust, you need not ask for more or less of anything.  You don’t ask for substitutions, and while you’re free to dole out compliments or moans, if necessary — you don’t ask the chef to add more or less of anything to what he deems as perfect already. And he’s right.  It is actually perfect.

I always finish up my meal at Ino Sushi with a Natto Maki or handroll (pictured above).  It’s a simple and clean handroll with a fermented soybean concoction (natto) with some green onions.  It’s a sort of acquired taste, but it’s always a nice finish to the meal. And traditionally in Japan, you finish off with this. So I do, too, though I could just as easily eat it to kick off the meal!

The cost at Ino Sushi is significant, though invariably, about $100 of the bill is from the sake alone for me.  That Kikusui goes down like sweet water, and is hazardous to the bill.

You do not order “rolls” at Ino Sushi outside of simply maki type rolls like the natto-maki shown above — not if you want any respect at all — and if you just let Inoue-san take you on a journey through the sea, you will most likely never want rolls again.

Ino Sushi is located inside the Miyako Mall.  My suggestion is to park in front of the Kabuki Hotel or inside the garage, then walk through the side doors that can be accessed via the driveway of the Kabuki Hotel.  Once inside, turn to the right and walk down the stairway — and Ino Sushi will be the small restaurant located to the left as soon as you pass the bathrooms.  (There is another Japanese restaurant before this; that is NOT Ino Sushi.)

Call to make reservations for the sushi bar because walking in on any given night between Tuesday and Saturday (the days they are opened) will not get you seating.  Once you have secured reservations, go to this dinner with a no-max credit card and a mentality where you are prepared to try the best that this man offers.  Trust me on this — you will not be disappointed.