I bade 2010 farewell (and quite happily, I might add) with a good meal at LaSalette Restaurant in Sonoma. Tucked away in an alley shopping strip, LaSalette was offering their regular menu on New Year’s Eve.  With nice ambient lighting throughout, the decor was comfortable and cozy, but still held a romantic feel throughout the restaurant.

Upon arrival, the hostess apologized and told us there would be a short wait. We decided to grab a seat at the bar in front of the kitchen at LaSalette Restaurant, and it seemed a good night to order a glass of champagne.  The drink menu boasts Martinis on it, but it turned out it was a Soju-martini; not quite the same, so I passed on it.

This turned out to be a great spot to take some photos, as every order was placed on the counter in front of us prior to being delivered to the tables.  While sipping champagne, the kitchen staff happily laid the food down and let me take photos of all the dishes being served up in the restaurant during my time at the bar. 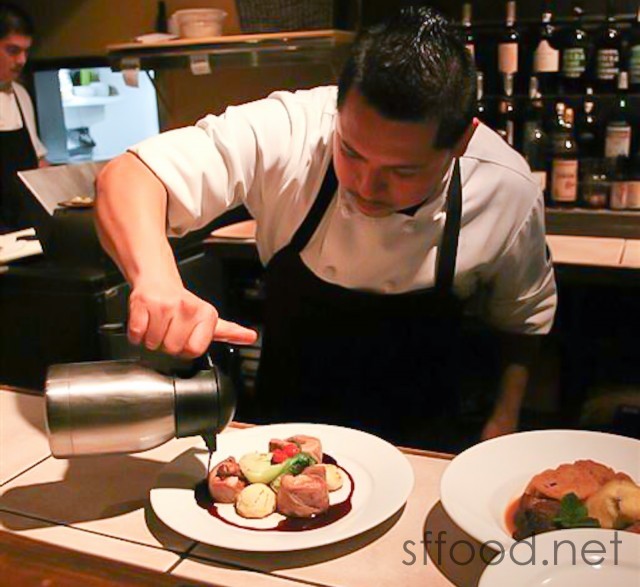 Each dish was carefully handled, and the portions on most of the dishes looked good.  What was most exciting was the sampler plate they offered, which the staff explained was their version of “tapas” at LaSalette Restaurant; we were both excited to get seated so we could try this ourselves!

Here are some others that were prepped in front of us: 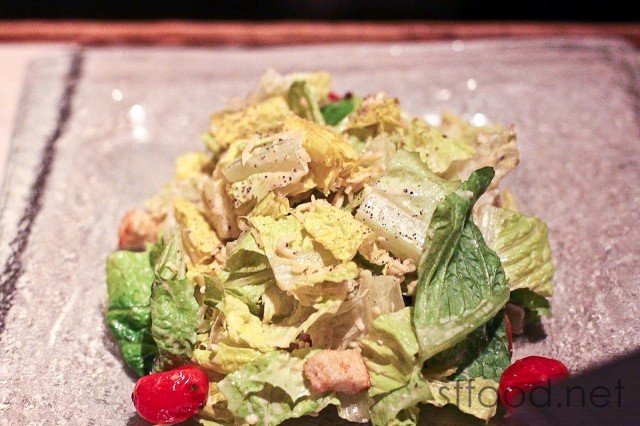 Dish after dish looked appetizing, but given that a person’s stomach has limitations in space, we knew we’d have to end up ordering a reasonable portion.  After about 15 minutes, we were moved to a corner table.

The Starters at LaSalette

Now up to this point, service had been really nice at LaSalette Restaurant.  Our hostess was pleasant, and the kitchen staff was friendly and so accommodating.

Then, we met our server for the evening.  I didn’t catch his name, but either he was new, or he just wasn’t really good at his job. On New Year’s Eve where it’s a special dinner for virtually every group dining at LaSalette Restaurant, the restaurant should make sure that the servers are up to par with the special occasion.

First, he explained the specials of the evening and then took our drink order. On this evening, we picked a Portuguese wine called Esparao, given that we were about to feast on Portuguese cuisine.  This took some 20 minutes to be delivered to the table. 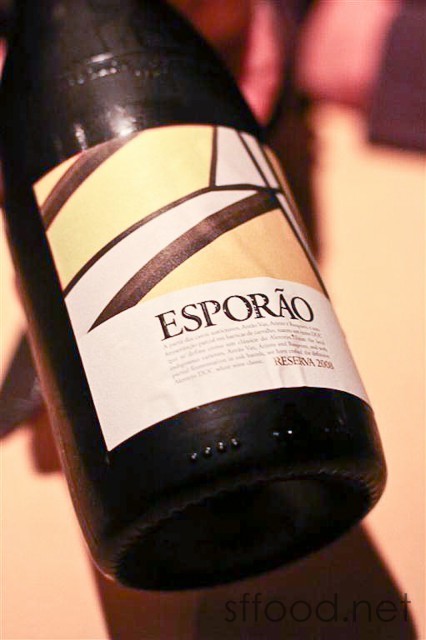 The wine itself was chilled nicely, and had a bouquet aroma to it while it also offered some fruitiness.  Most notable was the unmistakably oak scent, which I have learned to appreciate more now than before.

At about this time, he took our order — and we ordered a lot. About five minutes later, he delivered us the amuse bouche of the evening.

Then about four minutes later, he delivered it again.  Seriously.

Even as he was placing it on our table, he didn’t seem to realize that he’d just done this a few minutes ago, and that it’s probably for the table next to us who were still waiting.  We let him know, and he shrugged and told us to enjoy it; he then brought out another set for the couple next to our table.

“It’s like Groundhog Day,” I told Mr. K, “which means this year will never end if this continues!” Ironically, the one item that we were served twice was not impressive. I have nothing to say about it, really. I hoped it was just a shabby representation of what was to come, or more accurately, what I hoped was to come.

Here is another pet peeve of mine.

Call me picky, but when we order items off the starter menu, and entrees — there is an order in which these items should be served.  In this case, we ordered the sampler, plus two soups, one starter, and two entrees.  The sampler should have been served first, to enjoy with the wine, and then the soups should have been served, with or without the appetizer.  Instead, the sampler and appetizer came out at the exact same moment, taking up a large amount of real estate on the table.

I can’t say if this is a kitchen problem or a server problem, but if I were the server, I’d have sent back the starter to make sure my customers could munch on this sampler plate first.

That said, the sampler plate was fantastic. The anchovies were simply exquisite with the perfect amount of saltiness to enhance the fish flavor, but not overpower the palate and ruin it for other items.  We skipped the blood sausage as I’m familiar with South American blood sausage (Morcela), and it just doesn’t suit me as much as Korean blood sausage. Instead, we opted for Linguica, which was also delicious.  The Lomo was a bit plain, but the cheese on this platter was simply phenomenal; it was a housemade Farmer’s Cheese, and it was simply perfect and so refreshing.  If I didn’t know better, I would have thought it was a cross of ricotta and whip cream.

Scallops on their own can get bland. It offers terrific texture, but the taste, in my opinion, always needs enhancement, like a good sauce to accompany it. At LaSalette Restaurant, it was crusted with Chourico sausage crumbs and served up with a sweet potato puree.  The scallops were cooked exquisitely, and the combination worked marvelously inside the mouth.  I absolutely loved this dish and almost wolfed it down in one bite .

But “when in Rome”, they say — and when dining at a Portuguese restaurant, one must try the Caldo Verde, what they call their “national soup”.  This being my first time having this soup, it’s a bit difficult for me to say whether this was a good example, and whether it tasted the way it should.

What I can say is that while it was nowhere near my favorite soup, it had a strangely warm and comforting taste to it, reminiscent of “home” albeit never having eaten anything like this at home.  The collard greens offered a slightly bitter quality to it, and the chunks of sausage in it provided substance; the soup, overall, was not thick but offered depth with a very unique flavor profile. It was unusual, and in an unusual way, I actually liked it.

Then came the entrees.

The Entrees at LaSalette Restaurant

Polenta is simply one of my favorite things.  I used to love potatoes, but I’ve discovered since then that a well-cooked polenta is almost impossible to beat.  (Case in point: Bella in San Francisco offers one amazing baked polenta — which I have not reviewed yet.) Seeing this on the menu elated me!

What was delivered, however, was beautiful to look at and admire, but truly undercooked and not quite the polenta I love.  While it was golden yellow in color, it was so thickly cut (which I like), and therefore, the middle being less cooked made the entire dish too dry, chewy, and hard to enjoy. I actually felt a little sad!

Having seen this item being delivered to other tables at the beginning of the night, I decided I wanted to try it.

It’s a nice portion of pork tenderloin, filled with an olive, fig, and almond stuffing — served up with potato croquettes.  The croquettes were divine, and the pork was nicely cooked, but the filling was not my ideal.  I’m not sure if it’s the olives in it that I didn’t like, but the subtlety of pork became lost when eating it altogether. Green olives can, theoretically, overpower pork.

Mr. K’s order was the Feijoada Completa, what the menu called the Brazilian national dish.

Now I know Brazilians love their meat, but this was not quite what they had in mind, I think.  If a Brazilian churrascaria is any example, that country knows how to cook and serve their meat, and this dish fell short of impressing anyone. Being a rice-lover, I enjoyed the rice they served in the middle.  But neither Mr. K nor I liked the olive tapenade type of taste that pervaded throughout this entire dish.  It very well could be a matter of preference as the dish was not bad; it simply just wasn’t the utmost in taste when it came to a big combination of great meats like beef, pork and sausage with rice.

I find that I always hesitate to order dessert if the entrees fail to knock my socks off.  Because we had ordered so much food, and a good portion of our entrees were leftover, we decided to just finish our wine and skip the dessert on this evening.

Soon thereafter, our server delivered us this “introduction to the chef” bookmark along with two complimentary truffles.

On any other night, I don’t expect it, but it occurred to me then that for such a small restaurant in a small city like Sonoma on a special night like New Year’s Eve, Chef Azevedo would have been well-served to come out at least through a couple of his seatings to introduce himself and check on his patrons, in lieu of what may be their customary bookmark distribution process.

During my two plus hours here, I never saw him once.  His appearance in the dining room would have undoubtedly made the meal more personal and personable.

Mr. K and I had a wonderful time here, as we always do, but that is more credit to us than LaSalette.  Many things about LaSalette impressed us, particularly the homemade cheese, scallops, and the sampler plate option.  Some other things left us underwhelmed.

The total cost of the dinner, with a significantly large amount of food, came to a moderate $160 not including tip.   But for $160, my final judgment on this restaurant is that a better and more personal meal can be had in Sonoma or nearby towns.

Santé – the Underrated Gem Inside the Sonoma Mission Inn