In the last five years or so, I’d occasionally, and more frequently, run into something being offered on a menu that was cooked by a method called “sous vide”. Initially, I’d order it just for the sake of seeing what I ended up with, but the consistency in sous vide dishes compelled me to look it up one day some years ago. As someone who cooks, the theory behind the sous vide method made perfect sense.

Even if this is too rare for you (though it shouldn’t be, in an ideal world!), or however you prefer your steak, the difference will be in the water temperature, not really how long it’s in that water temperature. Now I can cook a mean steak sans sous vide, and about 98% of the time, I’ll get exactly the rarity level I am wanting for a particular steak. What I cannot do on a conventional stove top or a broiler, is get a thick cut of meat like the one shown above, to be the SAME color from top to bottom. The outside was seared (in this case, with a blowtorch) but the meat itself was cooked via sous vide.

Obviously, I want this machine. And in years past, I’d have had to invest a huge chunk of money to invest in one for my kitchen, or sit by the stove adjusting water temperature for three hours in hopes of imitating sous vide. As much as I love good food, I start to lose interest if it becomes too tedious.

But in the last couple of years, this method of cooking has become more accessible to the home cook like you and me without investing a few thousand dollars. We don’t have to be Ferran Adria or Thomas Keller to cook sous vide.

So when I was invited to Nomiku headquarters for an event they were organizing as their first “Instameet” — I immediately said yes, and rearranged my schedule to go.

Basically, sous vide is giving your food a water bath at a certain temperature for a certain amount of time. What you cook will determine the temperature and time. You envelope your food in a vacuum-sealed bag or a Ziploc bag with the air removed so that each side of the food item is technically touching the heated water. Throw it in a bucket or pot of water at the desired temperature and keep it there until it’s done.

Heat the water to X degrees, plop your food item(s) into a baggie, toss in the water, leave for X number of minutes, take out and eat it.

While the technique makes sense, it’s also hard to imagine until you see it. And as fancy as “sous vide” may sound–it’s actually an astoundingly simple way to cook when you have one of these gadgets.

In that bag, however, you’ll be putting all of the seasonings, herbs or what have you into the bag with the item you’re trying to cook.

Think about it: your salt, pepper, rosemary, olive oil and whatever else you use is inside the bag where the steak above is releasing its own oils and juices, and at a warm temperature, it slowly and evenly cooks for an extended period of time….you can see how this would amplify the flavors of each items enclosed in the bag, versus our usual method of cooking in a pan where the oils and juices inevitably seep out of the meat.

A Visit to Nomiku

So last week, I went to the Mission area of San Francisco and visited with the Nomiku staff at their very hip and very cool space. They were serving sous vide cocktails, wine and sous vide food to showcase what the Nomiku Immersion Circulator could do. 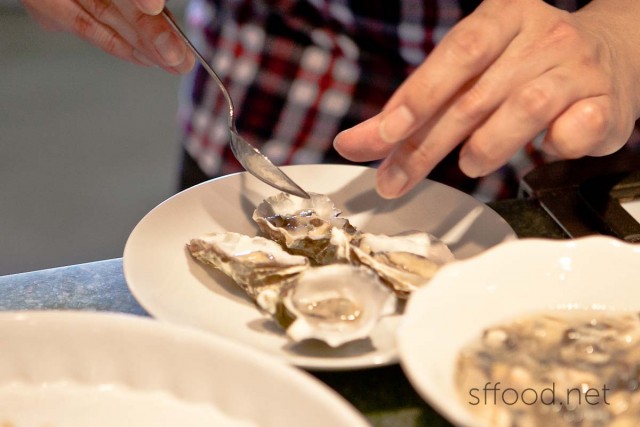 As soon as I entered, drinks were offered (my kind of event!) and I got to watch the staff go through final preparations and plating of the food. Shown above is sous vide oyster — where the fresh oyster was shucked, then bagged with bacon fat (!) and cooked sous vide style at 48 degrees (C) for 15 minutes.

What emerged was this:

It’s interesting that because these were sous vide oysters, it looked nearly raw–yet from the outside straight into the middle of the oyster, it was most definitely slightly cooked. Doing this is by a quick boil in boiling water would have yielded a completely cooked oyster on the outside and potentially raw oyster in the middle. Garnished with a red bell pepper garnish and bacon bits, it made for a nice appetizer. 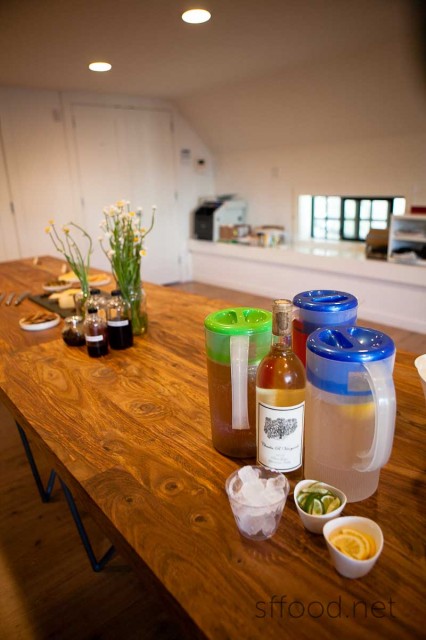 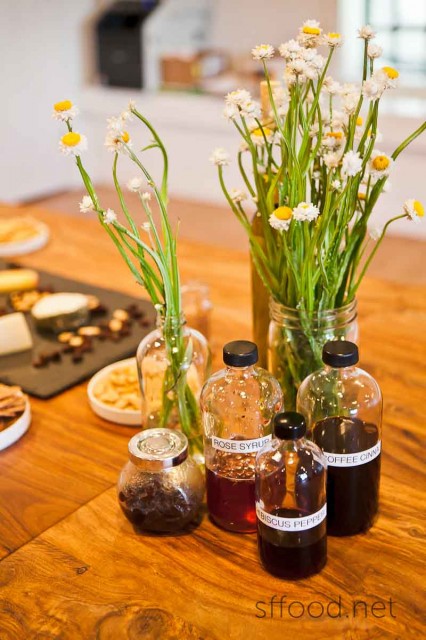 I was expecting sous vide food, but they had also prepared sous vide cocktails. The bottles shown above contained some magical elixir like sous vide raisins for a rum raisin cocktail, and rose syrup infusion — watch this video and see how easy it is!

These creations made for delicious cocktails of which I tried all three offerings–gladly! 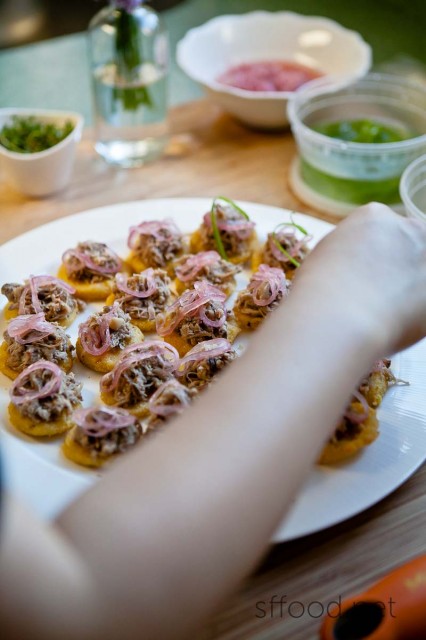 To create the pulled pork, the pork was sous vide for 18 hours, and what resulted was a “fall-off-the-bone” soft pork meat that barely required pulling to shred into what’s shown above. Furthermore, because it spent 18 hours cooking its own juices, the full flavor was retained, and paired with housemade arepas, the combination was tasty…and pretty.

But the Nomiku wasn’t just for meat and seafood. Also presented were vegetables and desserts, all created with the assistance of a Nomiku Immersion Circulator.

Drizzling oil on the veggies

Very happy with the results

Second, I could eat this all day. If I hadn’t looked at the meat, I would have guessed it was chicken thighs because chicken breast, this thoroughly cooked through, doesn’t taste like this. This meat was moist, it was full of flavor despite not having any excessive fattiness, and the meat had completely engulfed the curry seasoning. All of the ingredients sealed in a bag in a warm water bath of 60°C for two hours yielded something wonderful. Served on endive leaves, it was fascinatingly light in texture but substantial in flavor. Sprinkled with chives and blossoms, it was also gorgeous to look at.

Lest you think that Nomiku Sous Vide is good for only main courses or appetizers — take a look at this. These are apple cookies stuffed with sous vide dulce de leche. The condensed milk was placed into canning jars and immersed in a bath of 85°C for 15 hours. Two jars were being prepped while I was there. Check out the color of the dulce de leche drizzled on top; these cookies were sinfully rich and delicious. 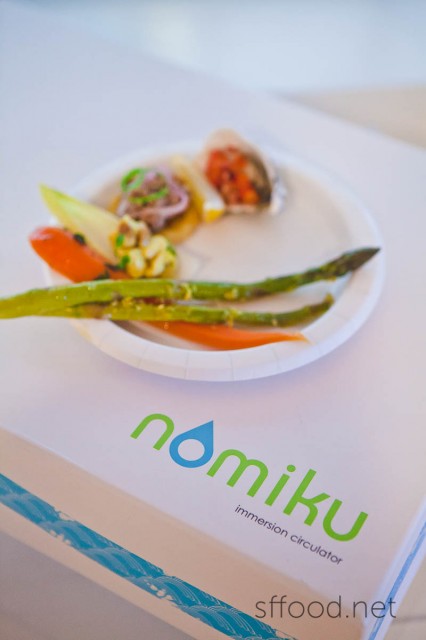 It was a nice showcase of what the Nomiku Immersion Circulator could do. The circulator makes it possible to reproduce a lot of what is normally available only to commercial or high-end restaurant kitchens. What’s even better is that because you’re not limited to a specific pan size and can use a bucket as big as your heart desires, it’s conceivable to cook five or 20 items all at once, so long as it’s 20 of the same items, OR the temperature requirement is the same for all the items. I’ve always held myself back from preparing steaks for parties larger than six or so, because short of barbecuing the meat, preparing more steaks than that in my own kitchen is not ideal. But with the Nomiku, it’s now doable; I’d give all of the steaks a quick sear afterwards for some caramelization and color, which doesn’t take much time at all.

For me, or anyone like me, the one downside is that to sous vide meat, you generally need to plan your dinners ahead of time. I tend to think about what to make for dinner at 5:30 PM, and if it’s meat, it won’t be ready in time. It’s ideal to start tonight for dinner tomorrow night–which makes it great for people who tend to plan out dinners.

While “sous vide” sounds like it would be appropriate for experienced cooks only — it’s even more ideal for less experienced cooks who can’t pump out consistently good food. There are lots of recipes available regarding what temperature to use for what item and for how long, and if you just follow that—there’s nothing else to it.

For a lot of meat or seafood, you have a very tiny window of opportunity between perfectly cooked to eating rubber or leather for dinner. For just under $300, Nomiku removes a lot of that risk; food will cook up to a certain amount at the designated temperature, and just because you took the bag out 10 minutes later than you had intended, you don’t end up with food burnt to crisp or dry as bone. And for a lot of items, sous vide-ing (that’s…not a word) your food will bring out a significantly enhanced flavor in your cooking that’s just not easily replicated in traditional methods of cooking.

Nomiku is available on the company website or on Amazon–both offer free shipping. They’re also in some retail stores if you look for it.

If you want to cook consistently good food, having one of these in your kitchen is a must! I’ll definitely be getting one, so expect some sous vide recipes on this site soon.

*Affiliate links may be included.

A Visit with Prubechu -- Chamorro Cooking Arrives in San Francisco