Roy’s Restaurant is hosting media dinners in various cities across the U.S., and on July 17, I had the privilege of attending the media dinner in San Francisco. In a small group of ten, it was a sit-down dinner kicking off with the Pacific Rim Cosmotini — a flavorful cocktail that is new to the menu with the launch of their new menu.

All of us were offered this drink while we schmoozed in the bar area of Roy’s San Francisco, which I had been to plenty of times in the past for their “Aloha Hour” — a happy hour that lasts until 7PM each evening. Come dinnertime, we were escorted to the dining room of the restaurant for dinner. 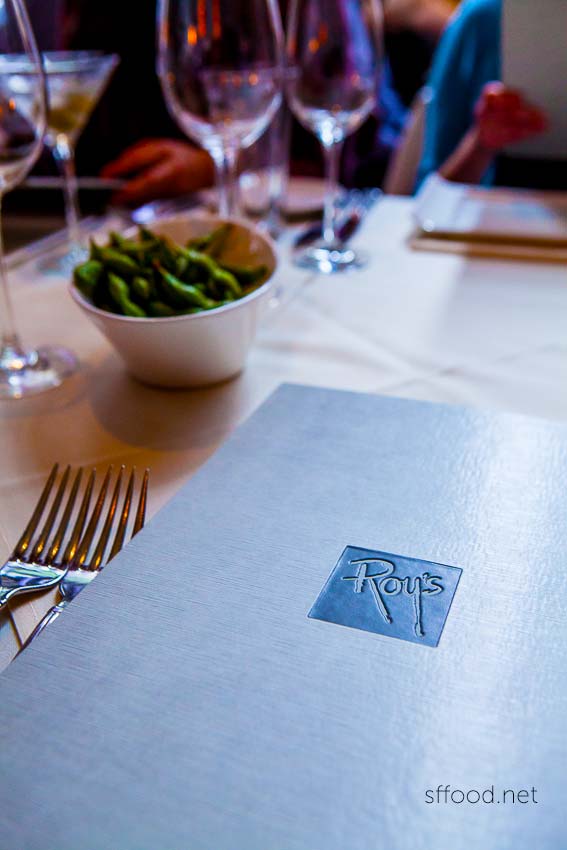 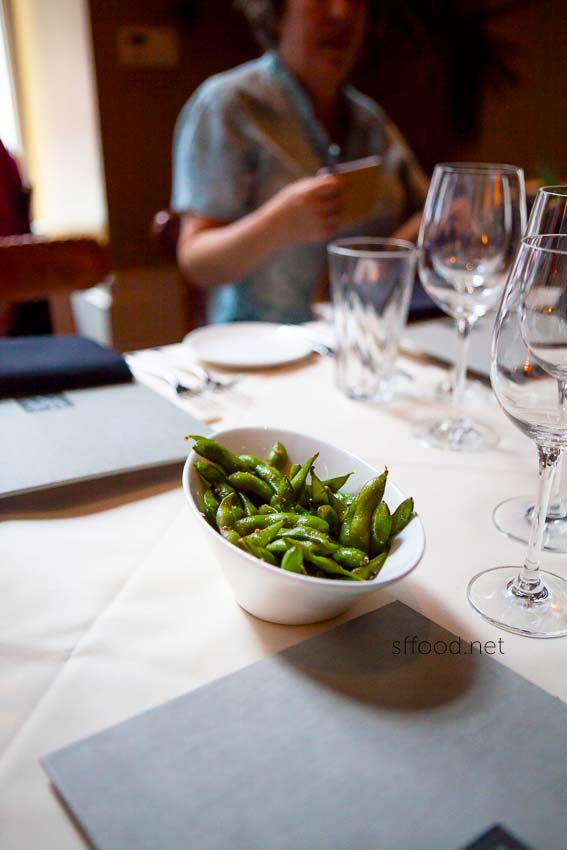 Once seated for dinner, nicely seasoned edamame beans were brought out to the table.

For those who don’t know, Roy’s Restaurant is one of  the best-known “Hawaiian Fusion” restaurants; over the years, the fusion has extended to far beyond just Hawaiian. With the launch of the Pacific Rim menu, flavors from countries like Thailand, Korea, Japan and even Australia are incorporated into the cooking. Looking at the enormous menu for the evening, I couldn’t help but get excited. With items like lobster pot pie on the menu – who wouldn’t be?

Before the food came out, we were greeted by Chef Edgar Agbayani of Roy’s San Francisco, working directly under the head chef at Roy’s: Nate Payo (not pictured). Welcoming and absolutely cheerful, he actually matched the kind of flavors I expect from cuisine: sweet, bright and fun. Some folks had questions, which he answered, and Chef Agbayani would pop by a couple more times during the evening.

There would be four appetizers presented on this evening. 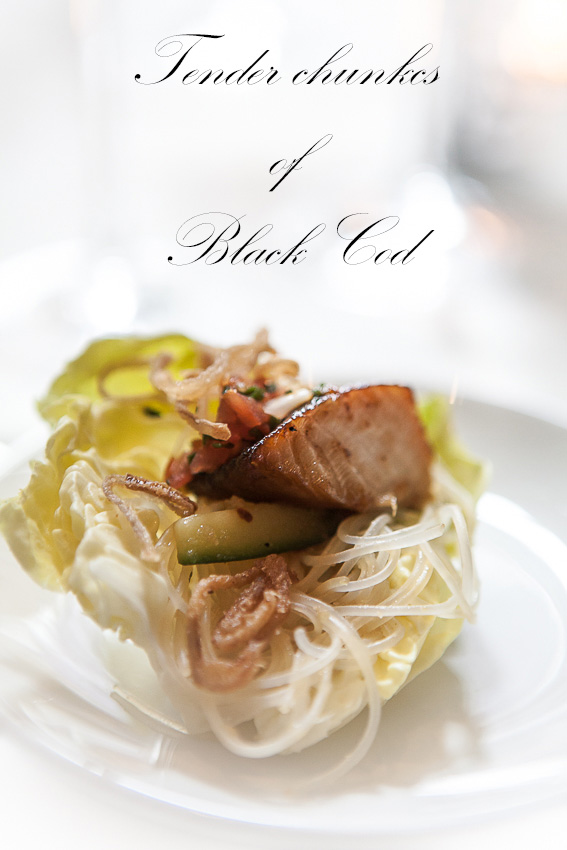 First up was the Misoyaki Butterfish Lettuce Wraps. A wonderfully marinaded and lightly cooked black cod is the star of this dish, supported by noodles, garnish and the lettuce. While called “butterfish” — it’s actually black cod that transforms into a flavor similar to butterfish. Sweet but with a punch of umami from the perfectly marinaded fish, this dish brought the palate to life, ready to devour food. The balance between sweet, heavy and light was really well-done. 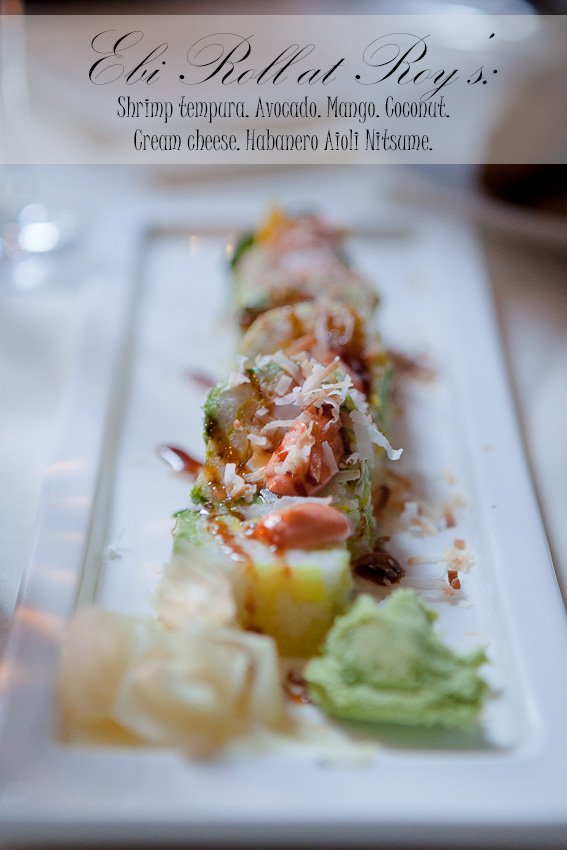 Next up was what was simply called, “Ebi Roll“. At a sushi restaurant, you’ll never catch me ordering ebi; in fact, you’ll never catch me ordering sushi rolls, in general. That said, this particular roll was adored with what seemed like a light batter and avocado, as well as a variety of sauce that really made each bite quite rich and delicious. Served at a slightly warmer temperature than room temperature, I find that I’d definitely recommend this roll as an appetizer. The portion size was nice that it would dissipate crazy hunger pangs with a cocktail.

Of the appetizers, most interesting to me was the Wagyu Burger at Roy’s Restaurant. Just as someone who loves burgers, I’d have enjoyed this perfectly made burger. But taking the first bite, I notice an entire flavor lineup that I wasn’t expecting. It was a spice and pepper of some kind — perhaps Chipotle, though it tasted like it had a slight more kick to it — and combined with the egg and grilled onions, it was truly…interesting. The fact that it tasted really good was one thing — but I also wanted to taste the actual beef, so when I spotted a quarter of one burger sitting on a plate being ignored — I took that opportunity to grab just the meat and taste it.

WOW. The meat was fabulous and it’s unfortunate that because of the sauces and spices, the great flavor of the meat doesn’t shine through — but, that said, it was a really good burger put together, too.

The last of the appetizers for this evening was a delicious play on the Chinese “gua bao” with a thick but soft slice of pork, crispier on the outside, accompanied by a vegetable slaw and stuffed into a delicious, warm steamed bun. It was a tad sweet for my taste, but I know slews of people who would love it.

The Starter Course at Roy’s Restaurant 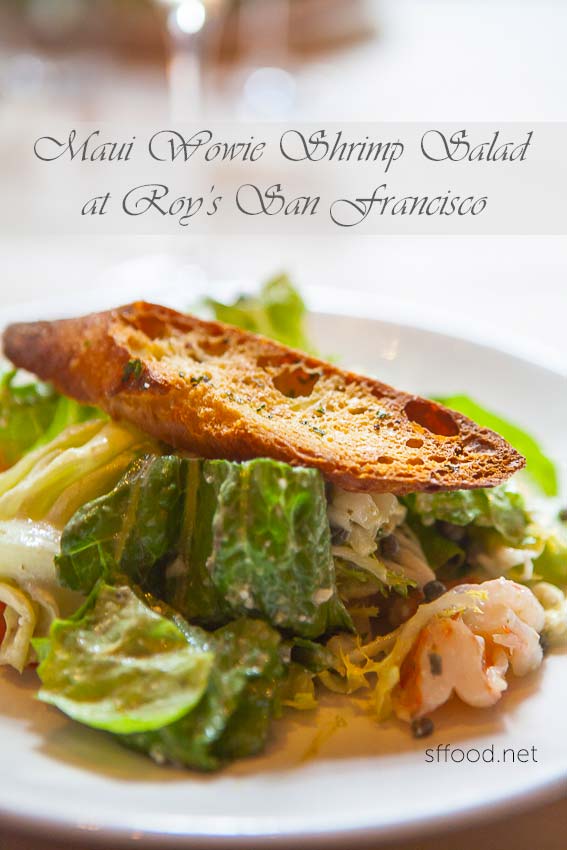 I enjoyed this next course immensely, especially after the burger and pork steamed buns. The produce was all fresh, but that’s a given. Mixed into the salad was a good number of shrimp — but best of all was the dressing. A caper and lime vinaigrette made this dressing light and bright, and the more subtle shrimp and avocado flavors were played up due to the dressing. The crumbles of feta cheese, along with the avocado, provided plenty of creaminess, and the greens provided the varied texture.

The Entrees at Roy’s Restaurant

By this point, as you can imagine, we’re all getting pretty stuffed. Even after quarter portions, I found myself feeling quite full after the appetizers. But with each additional course, somehow — someway — we managed to eat more.

Next up was the Alaea Salt Crusted Bone-in Ribeye Steak. At this time, the red wine of the evening was poured so that everyone could have a glass with their steak — and despite how full I was, I was thrilled to try my favorite combination in the world — steak and wine. 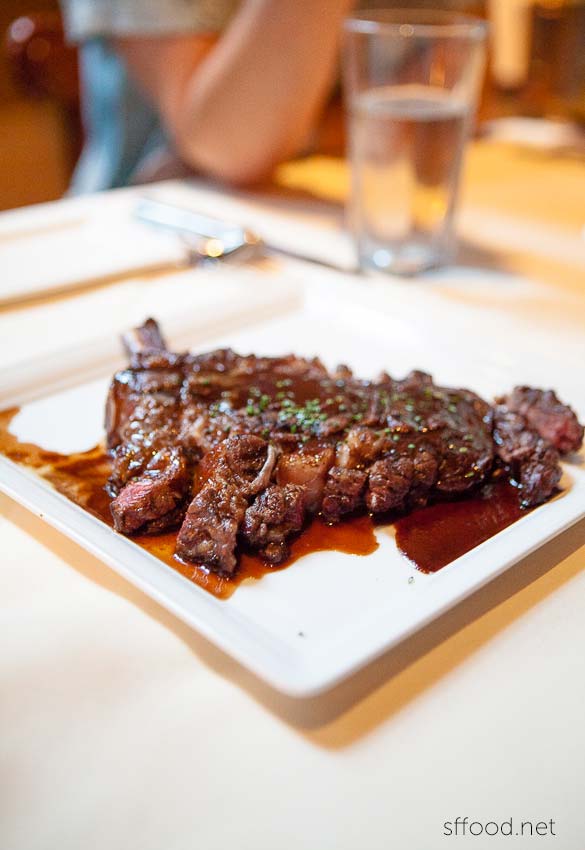 The steak was cooked well.
The sauce — a Peppercorn Shoyu Brandy Sauce — was also tasty on its own.
Combined, though, I’m not sure this steak matched the level of cooking previously showcased in the appetizer portion of the meal. The taste of the meat presented nothing all too special and it actually needed a sauce. But with the sauce, whatever flavor the meat had was really minimized. With the wine, an Argentinian Malbec “Santiago Graffina Centenarlo Reserva,” it was mildly better, but overall, this particular entree was just okay.

Closeup of my portion of steak

If the steak didn’t impress, the sides at Roy’s Restaurant did. The Spicy Korean Chili Fried Rice was quite good with sticky rice, bits of chili, and a hint of Korean spice. It was mild enough for anyone to handle the level of spice, but I could discern some kick to each bite. Paired with the steak, I thought this side dish to be the best. But then again, I’m Korean so perhaps I’m biased.

The Truffled Bacon Mac and Cheese was creamy, as expected, and while I didn’t see bacon, I could taste bacon.

There was actually a Tempura Vegetable side dish on the menu, but I saw it only at the two ends of the table, and none in the middle. Given how full I was, I had absolutely no inclination of requesting some. That said, the batter looked crispy and thin — but who knows?

Up next was the dish I had waited for all night — the Lobster Pot Pie. Ordinarily a large casserole is presented to whoever orders this, but for this evening, we were each given a smaller dish where our individual lobster pot pies had been baked. 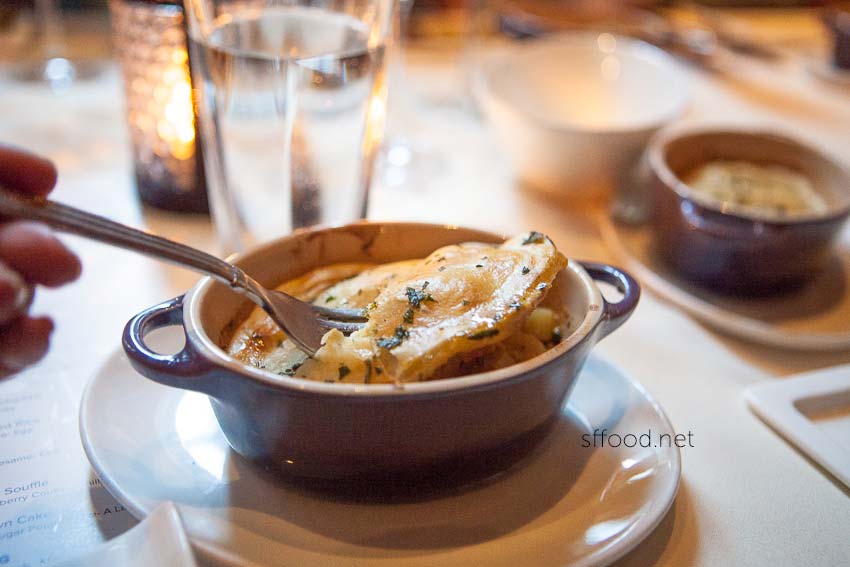 This is not my first lobster pot pie, but the pie at Roy’s Restaurant intrigued me. Instead of the usual cream and butter-based filling, the inside of this pot pie was decidedly Indian with a curry base. With a mild scent of cumin, it also offered richness in flavor, but remained light and quite liquid when it came to the filling. Combined with the buttery pastry on top, the entire thing was a mish-mash of west vs. east. It also explained why such a huge portion could be served to patrons — because finishing all of it would be plausible when it’s curry-based. There were chunky pieces of lobster rather generously baked within the pie.

Here’s the image provided to me by Roy’s, which shows the filling:

Finally, we were at the last entree of the evening: the Asian Inspired Hawaiian Ono Cioppino, shown below: 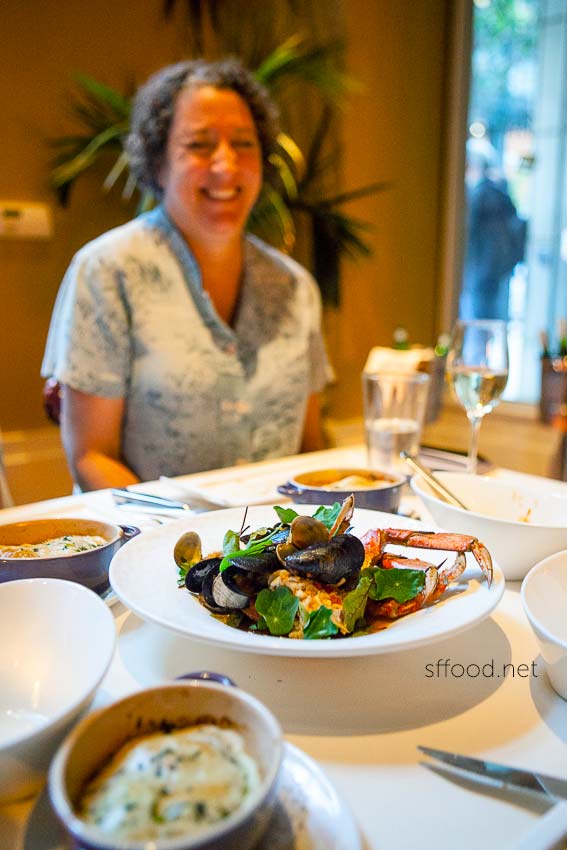 I tried a mussel from this dish and enjoyed the freshness, but the flavor of the stock was significantly Korean; it tasted like it was gochujang-based. Between the crab in the dish and clams, the portioning was decent but if this were my entree, I think I’d be left wanting a little bit more “umph”. While I don’t usually order cioppino off the menu unless the restaurant is known for cioppino, I prefer mine much soupier and more acidity cooked into the seafood.

Incidentally, each Roy’s Restaurant location has one item on the menu that is available only to that location — and this one is that item to Roy’s San Francisco.

Unfortunately, by this course, I was busy socializing with others that my brain, which had slowed down considerably, forgot to take photos. I did try both the chocolate souffle (shown above) as well as the pineapple cake with coconut ice cream, made in-house.

The chocolate souffle was extremely rich and smooth, but the real star is the pineapple upside down cake with ice cream. That’s the one not to miss; that’s the one that brings it home.

Overall, Roy’s San Francisco remains Hawaiian-based but with a greater selection of fusion tastes. Branching out even further than just the Pacific Rim, the new menu highlights a wide variety of countries, but also tones them down or mixes them up to make them palatable to just about anyone. You can still get your poke here, but there’s also so much more.

Based on what I tasted in the past and on this evening, I’d recommend you order the poke, Wagyu Burger and the Butterfish Lettuce Wraps to share, have a Maui Wowie Shrimp Salad for your starter before completing you meal with the Signature Lobster Pot Pie. For dessert, it’s definitely the Pineapple Upside Down Cake with some coffee.

The venue is nicely designed and located conveniently in SOMA. Roy’s has a private dining area, detached from the dining room, that can also be reserved for group dinners, shown above. With friendly service and a lot of creativity in the menu, Roy’s is sure to please even the fussiest diners; there’s really something for everyone here.

Also noteworthy are their happy hour specials, called “Aloha Hour” at Roy’s Restaurant. The Wagyu burger shown in the appetizer section of this post is available only for $9 from 4-7 pm on the Aloha Hour menu. Definitely worth trying!

Visit the Roy’s Restaurant website for their business hours and the entire menu, along with more information about the chef.

(Also, check out some new food bloggers I met at this media dinner: Bites and Bourbon and East Bay Dish.)