Something about being at Ruth’s Chris Steakhouse, or any steakhouse, that compels me to hit up the bar first. It really makes no difference whether the table is ready or not; invariably, I want to go to the bar first to have my martini. I’m not sure if it’s the wood panels or the fact that I’m minutes away from chowing on steaks, but something makes me crave a martini despite the fact that almost always, I will have wine with my steak.

Upon entering the restaurant, the space to the left is filled with people waiting for their tables, or others who came to have a drink while eating at the bar, watching television. When your table is ready, the hostess will come and get you to be seated.

I am normally not a big fan on chain restaurants, excepting Fogo de Chao which might be my favorite restaurant, chain or not. Ruth’s Chris Steakhouse, however, is like “old faithful” where the food is always pretty good, and the atmosphere and experience is basically consistent.

Many, many years ago, on my first visit to Ruth’s Chris Steakhouse (in Seattle, no less), I was totally impressed with this steakhouse. Over the last 15 years or so, I have noticed that the level of service has markedly deteriorated.  It does occur to me that it’s possible that I have just experienced more of “fine dining” since those days — but after giving it much thought, I am quite convinced that the company has just let itself go. The servers at RC used to be amidst the best-trained within the restaurant industry, providing a high level of service that could rival any Michelin-rated restaurant in existence. It used to be that going to Ruth’s Chris Steakhouse meant dressing up for a date night or a fancy dinner, whereas now, it consists of plenty of people in shorts, and almost nobody is in a dinner jacket. It’s become the plain and common American steakhouse, unfortunately.

That said, I still seem to go about once a year to Ruth’s Chris Steakhouse for steaks, usually more for work meetings than personal reasons. For this year’s Dine About Town (DAT) in San Francisco, we decided to try it out as I’d heard that their DAT offerings were a good bargain.

The first thing I noticed was that while we were handed the menus and wine list, there was no DAT menu on the inside. Had we not come for this specific reason, and had we been tourists who didn’t know about SF’s DAT, then we’d have been oblivious to the fact that a $34.99 dining option was available. Shady!

Then again, looking over the DAT menu once we received it, I saw no real appeal for the menu because RC offers up a pretty good deal on their own menu for a few dollars more with options for a ribeye steak as well as more sides you can request, whereas DAT menu limited it to the few sides they listed as DAT options — no substitutions allowed. The starting price for their own special menu was $39.99; with upgraded steak options, it was $45.99, I believe. (I can’t seem to find that menu anywhere but the link to the seasonal special menu is here.)

For the appetizer, I ordered the arugula salad with heart of palms and asparagus, which was lightly dressed and pretty fresh. There was nothing remarkable about the dish, but it served as a nice starter and was generously portioned. Without a heavy dressing, the taste of the vegetables stood out. 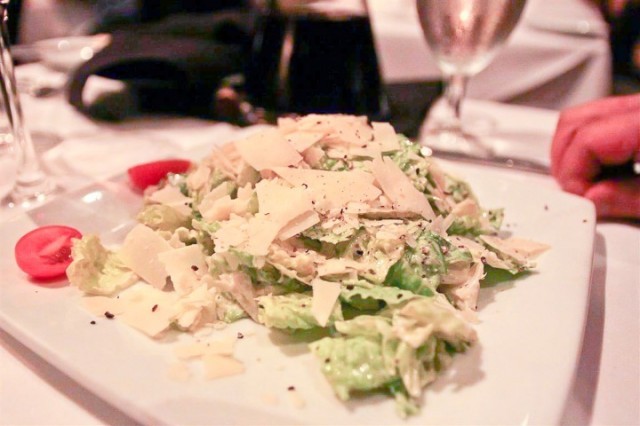 The Caesar Salad comes already tossed in the dressing, of course — and with a LOT of parmesan cheese on top. It wasn’t stellar — but it wasn’t bad either.

One of us at our table had the seafood gumbo. It appeared this was only offered as a part of the Ruth’s Chris Steakhouse special menu — and it was a nice surprise. The gumbo was plentiful and served hot; the taste was quite delicious. I’d order this again.

This filet mignon was also off of the regular menu, and one slice into it, it was obvious that it was undercooked. She had requested medium-rare, and it was basically blue on the inside. Now I am someone who would have jumped at the chance to eat a basically raw, thick cut of filet mignon, but most important is that the customer’s order be followed to a tee; if she wanted it leatherized, sinful as that may be — that is what she should have been served.  We sent this steak back to be cooked more.

The six ounce petit filet is – indeed – petite! The shrimp atop the steak was unimpressive — but this dish was offered as part of the $39.99 three-course menu. The steak was requested medium (arrrrggh) and it was cooked to a medium; go figure, they got that right.

At Ruth’s Chris Steakhouse, everything is a la carte, meaning you will have to order your meat, and then order a side for an additional charge or else you will literally be served a chunk of meat. Depending on the size of your meat and appetite, one side can technically be shared amongst two poeple, but the meal can get boring really quickly this way.

The Brussels sprouts and green beans were excellent, and the mushrooms were decent. The mashed sweet potatoes that one of us chose was fascinating — if it were a dessert. No joke, I’d eat this for dessert, but as a side — unless you have a serious sugar deficiency — it was entirely too much.  What was missing tonight that I have had before are the famous hash browns; Ruth’s Chris offers a huge plate of hash browns, cooked quite nicely, to accommodate your steak. All the sides we had on this evening are shown below: 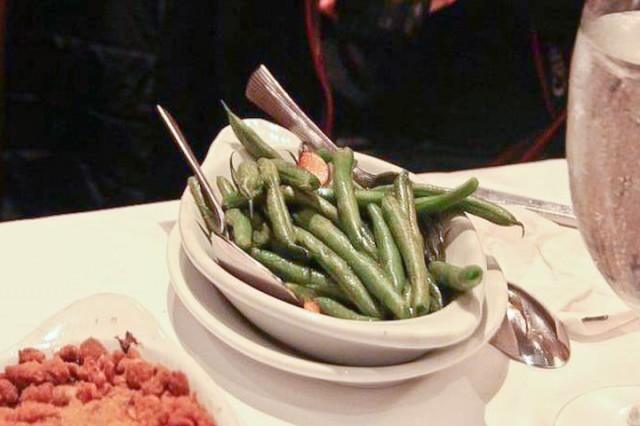 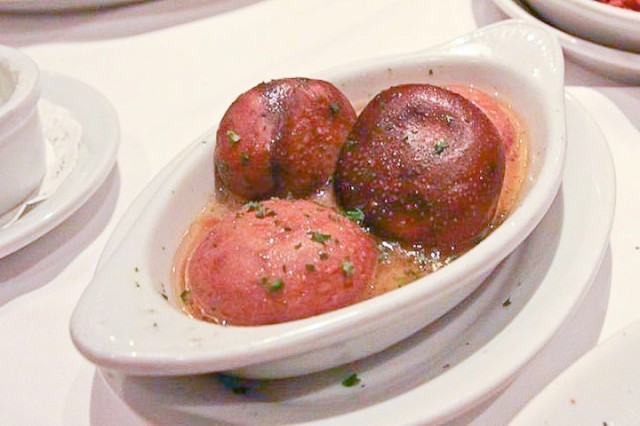 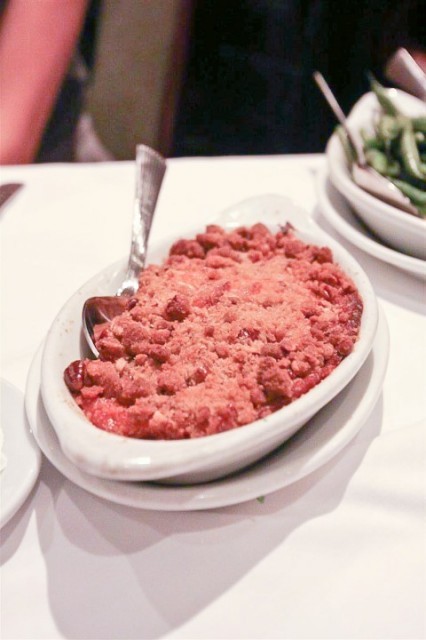 All of us were quite full, but since one of us had opted for the $39.99 three-course menu, we knew one dessert was coming (the cheesecake). There is a downside to eating with someone who is reviewing a restaurant, though, aside from needing to freeze for a few minutes when food is served to allow for the photos, and that’s my incessant desire to try everything different. Just as we had ordered four different sides to taste it all, we needed more than just one “included” dessert, so we ordered two more off the regular menu.  The portions were large, but none particularly reached superstar level on this evening.

But that was exactly what I was here to find out.

The chocolate cake at Ruth’s Chris Steakhouse was enormous and enough for four people to get more than one day’s worth of chocolate. While it was pretty good, there was nothing truly deep or lingering about the chocolate in this dish. It was sinful as far as the amount of calories and sugar that it took to make it but the taste in itself didn’t feel that naughty. Ordinarily, that’s a good thing–but I don’t eat chocolate cake to feel guiltless.

What I hate the most is when the idea is genious, and the actual execution of it fails. #FAIL! This particular dessert was not horrible — it just simple could have been so, so much more and it never even hovered in the vicinity of great. I’m a big fan of apple tart, but Ruth’s Chris’ version was dense and unappealing in texture once inside the mouth. That said, the aroma and presentation was quite delightful.

If one item came close to being impressive, it was the cheesecake. Although it was a bit on the sweeter side of things, it was also light while maintaining all the punch one would expect from cheesecake flavor. It looked more like a cupcake, but it was actually quite tasty. The pecan chocolate bars that were partnered up with the cheesecake were unremarkable in every way.

So on this evening, I found the company to be absolutely delightful, but DAT was not utilized at all – and Ruth’s Chris Steakhouse reached a new low. It’s not a terrible “this place should be banned” low, but what they offer does not warrant the prices. What I had expected from them was just a “consistent good” — and they failed to reach their usual level.

Our server was accommodating and friendly, which always enhances a meal, but she herself could not save the food. To come to steakhouse and have to send back food for being over or undercooked is unreasonable; that is the basic minimum that should always be met. If the steakhouse doesn’t know how to cook a steak — who does?

On the other hand, the martini was stellar, and I got to spend time with some of my favorite friends. We had brought our own wine bottles on this evening, so we paid the corkage of $25 per bottle, which is pretty fair.

All You Can Eat Curry: Curry Village