It’s about one month shy of a year from when I put down my pen (so to speak, as no pen was used), after finishing the final draft of “Food Lovers’ Guide to San Francisco”. For a few months, I could not try a new restaurant after having visited over 90 establishments in 3+ months. I spent the next few months simply visiting the places I loved, and missed terribly during the book months where stomach real estate, a fat wallet and fast metabolism were valued above all else. Then due to work, I moved ten miles below the city of San Francisco, which cut my commute by almost 45 minutes to the Peninsula. Strange, isn’t it, how just the act of not living in the city, makes it feel so far away? I found myself scouring the area to find the good food here — and I’m proud to report that I have.

Have you ever had those days when your head feels about to explode, and your neck and shoulders are so tight that any movement feels like they might just crack from stress? Well, it was one of those days when I came home, poured myself a scotch, and blanked out into space. The always wonderful Mr. K tried to snap me out of it, but the more time that passed, the worse the stress and melancholy became. Then it dawned on me: drinking would not suffice to make me feel better. I needed more. I needed sushi. (That’s how I roll.) But heading to the city felt too time-consuming, not to mention getting sudden seating at Ino Sushi was all but impossible on short notice, so I did a quick search to find what sushi places were nearby. Those who know me are all aware that I do not do this; I do not do a random search to try some potentially horrid place and waste money and calories–I’m serious about eating good food. But desperate times called for desperate measures.

Having zoned in on a place called Sushi Kei, we drove over to find a small, almost nondescript place in Millbrae. The signage outside is practically nonexistent, and unless you walk by, you’d never realize there’s a Japanese restaurant here. Tables are few in the restaurant, and the sushi bar seats about 12 people, at most. Being committed to always try “omakase” (chef’s choice) first, we sat down and indicated that we want “sushi only”. This didn’t stop the sushi chef from starting us off with a salad with some fish in it — and I now know why: his salads are quite delicious and creative, and work wonderfully to get your taste buds prepared for what’s to come.

Chef Ryo Kikuchi, shown to the left, is a genius at traditional sushi. Every single sushi order at this place requires his creative touch, with no assistants or sous chefs in sight. After some ten visits now, I can safely say he’s a quiet and patient man who works hard and puts meticulous care and artistry into each bite of sushi he makes. In his subdued way, he will once in a while offer a chuckle, or make a quiet, reserved comment — but to date, I have found him to be a pleasant gentleman who sticks to his work. While located in Millbrae, he brings to Sushi Kei a distinct aura of Tokyo–and what he serves is very clearly — and very purely — very Japanese. Watching him is rather mesmerizing. Much like Inoue-san at Ino Sushi, his focus is impenetrable and his speed — remarkable. To match the speed at which I can plop these sushi pieces down is impressive in and of itself — but even when it’s a full house at Sushi Kei (which I’ve found to be rare — much to my delight), food comes rolling out of the kitchen and Chef Ryo creates and creates.

With sushi — cutting skills matter and the quality of fish is obviously crucial to a fine dining experience. But many places offer fine fish. To me, the one thing that defines a great sushi restaurant vs. a good sushi restaurant is the rice. The sushi rice offered here is sheer perfection. With the right blend of sweetness, seasoning and a spark of vinegar that cannot be missed, the rice determines the dance act that is to follow. Take amazing fish and put it on regular price, and you have some hip hop going on in your mouth; take the same fish and lay it atop the perfect sushi rice, and you have the most masterful waltz of flavors that dares you to not close your eyes and let the music take you.

Just as a person learns in the processing of growing up (or growing older, as the case may be) that having many, many friends is not what’s key, but having a few outstanding friends is what makes a great life — I feel the same applies to food. I’ve had the great fortune (or tragedy, if you ask a scale) of being born with an impressive palate. It’s not that I necessarily discern taste better than others (though I would claim I do!), but it’s like I was born with an adult palate, so it was not uncommon to see my six-year old self try intestinal linings of sea creatures and nod, commenting that with a little bit of rice, this would be extremely delicious. I appreciate a mesh of some rock-star flavors in a single bite — but in the end, it’s about simplicity for me and clean flavors coexisting in complete harmony where all else fades to the background and one sense — taste — takes over. At Sushi Kei — this nirvana is reached. The chef keeps flavors uniquely simple — and even delights the eyes with presentation. Look at that uni, and you can see how sushi is my Prozac.

I rarely order tamagoyaki (sweet egg omelette served sliced and cold) at a Japanese restaurant. In fact, while I randomly order any “sushi combination” — if ever I do, I request that this and ebi (cooked shrimp) be removed and replaced with something else. Anything else. But on my first visit, I forgot to request as such, and Chef Ryo served me up thickly sliced pieces of egg. “Here I go wasting stomach real estate,” I thought, but obviously could not send it back since I’m the one who forgot to ask that it be skipped. I did notice that he had no less than three variations of this (stuffed or plain) in his sushi display cooler. I tried it and immediately realized why he makes so many varieties of this. Just like his sushi rice, this egg carries distinct notes that make it special. You sense “sweet” but it’s not quite that; you sense salt, but that’s not it either. There’s a certain element of creaminess to the egg that is cooked with nary a flaw in it — and the texture makes it a welcomed treat in between fresh sushi. Do give this a try. 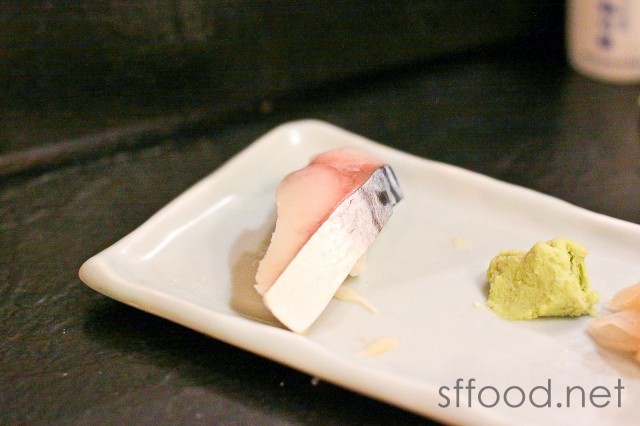 Many eons ago, when I lived in Tokyo, a sushi chef once told me that you have to try the “saba” (mackerel) from any sushi place to truly understand how good or bad a sushi chef is. If this is true (and I have mostly found it to be so, in my rather extensive sushi journey, if I do say so myself), then Chef Ryo catapults himself into one of the best chefs ever for this piece alone. The amazing mackerel oiliness and intense flavors, combined with the rice, make the saba at Sushi Kei one of my favorite things in existence. I could gorge on just 20 pieces of this for a full meal — for no less than five consecutive days.
Speaking of which, the Ikura at Sushi Kei is also quite fabulous. I don’t have it pictured here on this date, but it’s a must-try item. Frankly, everything here is worth trying. I have yet to try the real menu items, or the variety of izakaya dishes they have available here. I love the sushi, so why try anything else? But the real kicker is the price: on average, without fail, when I enter a sushi restaurant, the chefs turn around, grab a bill and seemingly write “$300″ on it. (It’s really quite fascinating!) I have no idea why my sushi omakase with sake bill comes to this amount. It’s true at Zushi Puzzle; it’s true at Ino. (Added 2014: at Akiko in SF, my bill was $250….per person!)
So you can imagine how pleasantly surprised I was (as was Mr. K, no doubt) when on our first visit, our meal was $150 total with a full bottle of great shochu, of which we had more than half leftover. The typical omakase being $35 per person here (of average consumption), our bill included some additions plus the $55 bottle of sake. This means that we were charged approximately $50 per person for omakase — and in my living history past the age of six, I don’t think I’ve ever eaten only $50 worth of sushi. Sushi Kei is traditional. At this price point and location, it’d be unfair to compare it to the major city’s best sushi establishments, but even when I do, it holds its own without question. It’s classic Japanese sushi — and the way sushi was meant to be consumed. Sure, there are some fancy establishments out there who “fusion-ize” fresh fish and make it into something better or worse — but for me, while I enjoy those experiences, too, I always want more traditional sushi at the end of the day. For those times, only Ino Sushi and Sushi Kei come to mind within driving distance from San Francisco. Service: 8.7/10 Ambiance: 6/10 Food: 9.4/10 Addictive Factor: 9/10 Overall Rating: 9/10 (Disclaimer: sushi only.)