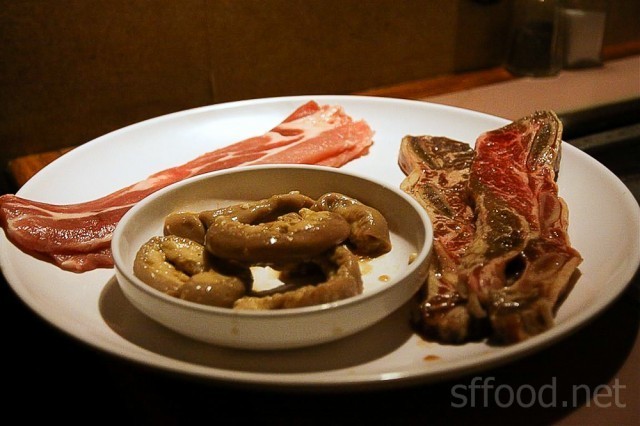 (First off, sorry about the photos. It was much darker in here than I was prepared for on my visit.)

Everyone is familiar with Korean barbecue now. You have your own table with a grill, and you cook your own meat to your liking. I’ve heard some folks say they don’t understand why the cost is so high when you have to cook it yourself — but part of the appeal of Korean BBQ is sharing drinks and conversation while being surrounded in BBQ smoke as your meat sizzles on the grill. Your clothes and hair will need to be washed after the meal but your belly will be happy, and generally, it’s a fun experience.

We have some great Korean BBQ restaurants in San Francisco (not to be confused with “great Korean cooking” as nothing is cooked), and YakiniQ is one of them.

For a nominal cost of $19.99 per person, you can feast to your heart’s content on a variety of meats, including galbi (rib), pork belly, beef brisket, pork skin, small and large intestines, squid, chicken, and other goodies. Also included is as many orders of steamed egg casseroles with soups and such being additional cost. I’ve tried the majority of items and I’ll tell you off the bat to steer clear of the poultry, and stick to the galbi, brisket and pork belly, both plain and soybean-paste marinaded kind. If you’re adventurous, the large intestines are pretty good — and the pork skin is fun and chewy to eat once cooked to a nice crisp. Everything else, it’s worth trying and included in the price, but it comes down to your own preference.

Aside from the all-you-can-eat option at an economical price, the true appeal of YakiniQ is the “dduk bossam”, or rice wrappers. (See photo above.) I once wrote a review about this awesome BBQ-accompaniment — and if you don’t know it yet, read THE AMAZING KOREAN DDUK BOSSAM in which I even give you instructions on how to eat this. To my knowledge, YakiniQ is still the only Korean restaurant that offers this nightly; I know a couple of places where they will provide it if I make a special request one day ahead of time, but I rarely make plans for Korean BBQ days ahead of time.

Well, the quality of meat is good. Not great, not the best, but you’d be silly to expect “the best” at a mere $19.99 per person. The galbi tends to be on the fattier side of things, and the pork belly will have cartilage in it from time to time, but nothing you can’t handle with good teeth or a pair of scissors. The ban-chan (side dishes) is decent, with kimchee, jab-chae and a surprisingly tasty mashed-potato salad (just take out the raisins). Some days the kimchee is good, and other days, it’s pretty bad — but I’m not here to enjoy the side dishes.

On weekend evenings, from Friday to Sunday, YakiniQ is packed. Without a reservation, your wait will be shockingly long, and it’s sheer torture standing by the stairs, smelling delicious BBQ that everyone else is eating. On weeknights, there may be no wait at all, but generally, YakiniQ is busy. YakiniQ is also loud. This isn’t some classy Korean BBQ where the buzz you hear is of people talking. No, this is a full-on loud Korean music with music videos of cute Korean girl bands dancing, loud guests of all races talking and drinking with servers running around trying to keep up. You don’t have to scream to be heard, but it’s far from quiet. Service has been inconsistent here. I’ve encountered some of the friendliest servers ever who accommodated my party of 20+ people without a flinch, and I’ve encountered some servers here that had trouble providing for my table for two. Bruce, the owner, has always been awesome; he makes this place fun and takes care of his customers.

As mentioned, the real selling point for me is the “dduk-bossam”. With dduk-bossam, I need a good veggie mix, and this is one area where I have to ding YakiniQ. It’s cabbage-based (ding one), and fully dressed in a mayo-like, wasabi-tinged sauce (ding two) and cut too thickly (ding three). It doesn’t help at all that I’m not a fan of cabbage, either. In my review of dduk-bossam, I explain how to make a good veggie mix — so if you feel like putting in the time  to do so and bagging it up for your visit to YakiniQ, feel free; goodness knows I’ve done it.

What To Do About Them Intestines

I won’t lie to you. Of all the Korean food — this is one of those that even other Koreans often don’t eat. It’s an acquired taste, to say the least, and the chew texture may turn you off — but let’s just say it took virtually no time for me to acquire a taste for delicious intestines. My preference has always been for the small intestines that come out plain and boiled, ready to grill — but as of late, more popular in Koreatown of Los Angeles, and available at YakiniQ is a lightly marinaded raw intestine that you cook thoroughly and sear to a nice crisp. (They do not have the plain, boiled kind.) I’m not a huge fan of the slightly sweet marinade (allegedly to tone down the intestine flavors), as “sweet” is not the taste I’m craving when I eat intestines — but YakiniQ makes a pretty good one. Aside from the fact that perhaps eating undercooked bovine digestive tracts may not be best for your overall health, the texture is awfully tough and chewy if this is not cooked to a crisp. The crispier, the better. As you push down the intestines onto the grill, be careful of FIRE — as I’ve shown in the photo. Personally, I like leaving much of what’s inside the tracts — and I just let them cook to a crisp without pushing them down to sear — but Bruce recommends doing this. I suppose it might rid the intestines of some of the — intestinal (?) — flavors.

All in all, YakiniQ is fun. For a nominal cost, even after you add in bottles and bottles of soju and beer, I’ve never had it go over $50 per person — and my friends (and I?) have been known to down massive amounts of soju (picture one table of six ordering 20 bottles total). This makes it an ideal location for groups of friends, and they have easily accommodated parties up to 30 people for me without a problem – so long as I made reservations ahead of time. Birthdays, celebrations and just general pig-out nights have happened here, and will continue to happen here. Try it out – but be sure to have no plans afterwards unless you want stray dogs following you around looking near rabid – and wear clothes that don’t need to be dry-cleaned. Expect to smell like BBQ until you take a shower, and you may have a light coating of oil all over you — but like I said, the tummy will be happy.

At the end of the day, that is all that matters, isn’t it?

YakiniQ is located at 1640 Post Street in San Francisco and business hours are Mon-Fri starting at 5pm, and they open at 4pm on weekdays. They’re open late-night until at least midnight on most days except Sundays.